If you ask every player in the NBA who the toughest cover in the league is, a majority of them would probably say James Harden. The Houston Rockets superstar has established himself as the best scorer in today’s game.

Portland Trail Blazers star point guard Damian Lillard admitted via Dwight Jaynes of NBC Sports that Harden is very tough to defend because of the kinds of calls he gets from the referees:

Lillard talked about the hazards of trying to defend Harden when he’s getting the calls he often gets.

“It’s hard to defend,” Lillard said, “When he’s driving to the basket, you don’t want to touch him. When he’s rising up for a three, you don’t want to get too close to him because he’s kicking his legs out and throwing his arms up on his follow-through, through your arms. If you get that type of whistle, it’s tough to defend.”

Harden is very creative in getting the attention of the officials for foul calls. He may be flopping at times while doing so or baiting the referees into it. Nevertheless, you have to admit, it is very effective.

The 2017-18 MVP has been the poster boy of the charity stripe for over the past six seasons now. He has led the league in free-throw makes and free-throw attempts over that span. 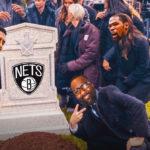 He isn’t slowing down anytime soon, as Harden is getting to the line at a record pace this season. Through 14 games, Harden has attempted 203 free throws — that’s 14.5 attempts per game — and has made 88.2 percent for the year.

The All-NBA guard is following up his historically insane scoring season last year with yet another, or possibly even better one this year. For the season, Harden is averaging 39.2 points while shooting 42.5 percent from the field and making nearly five 3-pointers and 13 free throws per contest.