Brady Henderson of ESPN recently dropped a bombshell report providing some shocking details about Russell Wilson’s high-profile exit from the Seattle Seahawks this past summer. Despite how the organization and Wilson’s camp have tried to make it seem as though their split was cordial and mutually beneficial, it seems that there’s much more to this than what’s on the surface.

Apparently, the Seahawks drew the ire of Wilson long before he was actually traded. It may have started some five years ago when the team’s general manager scouted Patrick Mahomes ahead of the draft:

In the spring of 2017, Seahawks general manager John Schneider was a conspicuous attendant at Patrick Mahomes’ pro day. The GM had become so enamored with the Texas Tech quarterback that Seattle would have taken him had he been available late in the first round, multiple team sources said.

Obviously, the prospect of replacing him with a young and then-untested quarterback did not sit well with Wilson. As if that wasn’t enough, Schneider went through the exact same process the following year. This time around, he had his eye on Josh Allen:

According to the report, Schneider was merely doing his due diligence. However, it is quite understandable why Russell Wilson wasn’t pleased with this development.

That wasn’t all, though. Not long after, Schneider supposedly went into a discussion with the Cleveland Browns regarding a potential Wilson trade:

Then came the clearest sign yet to Wilson’s camp that Seattle’s interest in other quarterbacks was something more than due diligence. The Seahawks, according to someone in Wilson’s camp and the Seahawks’ front office, called the Cleveland Browns before the 2018 draft to discuss a trade that would have swapped Wilson for the No. 1 overall pick. Wilson’s agent, Mark Rodgers, found out.

You have to feel for Russell Wilson here. After leading the Seahawks to Super Bowl glory in just his third season in the league, it seems that the organization was not very loyal to him in the succeeding years. Can you blame the man for wanting out? 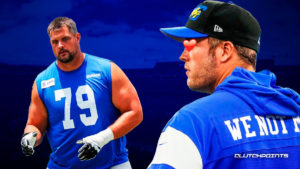