There’s been a lot of buzz about Danny Green potentially calling it a career after suffering a season-ending injury in the playoffs. But the Philadelphia 76ers sharpshooter isn’t planning to hang it up just yet.

On a recent appearance on his Green Room podcast, the Sixers veteran broke the news that he’s shelving retirement for another day. Green even made a prediction date on his return: right before the All-Star break.

“I’d like to end on my own terms and not a major injury. … I will be back before All-Star break. You better believe it. You heard it here first. So I will work my tail off to rehab to get back healthy,” said the Sixers vet.

“My body and my bones usually heal pretty well. I don’t have any bad habits. So, yeah, I think I’ll be back in time to help the team in the playoff run and show and prove that I’m able to still play at that level to help a team get a win in the playoffs.”

Given that he suffered the injury well into the Sixers’ playoff run, it’ll be tough to make good on that prediction to return in around nine months. But it isn’t impossible. Danny Green has had a long and storied career with several rings in his trophy case, and he’s still gunning for more. 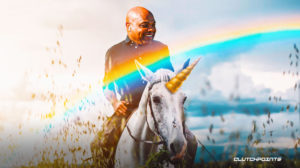