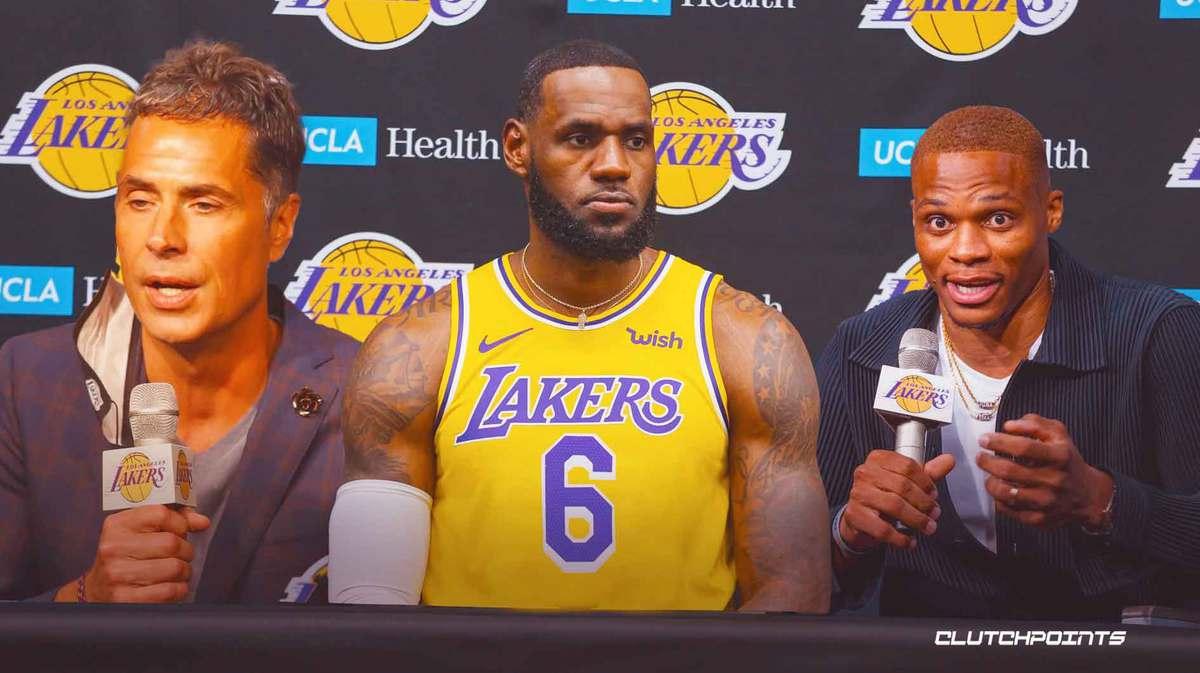 The Los Angeles Lakers conducted exit interview press conferences on Monday after they wrapped up their disappointing 2021-22 season with a win over the Denver Nuggets the day before, which their fans could enjoy for approximately 30 seconds before ESPN’s Adrian Wojnarowski reported the firing of Frank Vogel — emblematic of a season of organizational dysfunction and leaking.

LeBron James began the festivities at 9 a.m. PT (before Vogel’s firing was formally announced). Rob Pelinka then addressed the media for the first time since the trade deadline. Russell Westbrook blamed, well, everybody besides himself.

Appropriately, the day-long stream of press conferences struck a dour and regretful tone. Here are the notable tidbits and takeaways.

One persistent criticism of Westbrook — from fans and folks within the organization — is his lack of accountability and defensiveness in the face of criticism. In that regard, his remarks on Monday were perfectly emblematic.

Westbrook said he was “not sure what his issue was with me,” when asked about his tense relationship with Vogel. He blamed the coaching staff for making him “prove himself” despite his track record, and insisted — contrary to reports, comments from teammates, stats, and eyeballs — that he “did everything that was asked of him.” (Hours before he spoke, The Athletic reported yet another anecdote of Westbrook snapping at coaches in the film room.)

“I think it’s unfortunate, to be honest, because I’ve never had an issue with any of my coaches before,” Russ said. “I can’t really give you an answer to why we really never connected.” (Last week, the Los Angeles Times reported that Russ made his lack of respect for Vogel clear on “Day 1.”)

Westbrook was combative throughout his presser. He went on a rant blaming the media for writing “made-up stories” all season that he was constantly “fighting against,” though was not able to name an example of a false story.

Westbrook acknowledged his below-average performance but said the fact that he didn’t average a triple-double was his barometer for an unsuccessful campaign. For the umpteenth time, he emphasized that basketball isn’t as important as family or his community work — as if that’s unique to him. He shot down the intimation from a reporter that the Los Angeles native ever dreamed of playing for the Lakers growing up — in direct contrast to his passionate remarks at his introductory press conference.

He scoffed at the notion that LeBron and AD wanted the team to “Let Russ Be Russ.”

Q: "Did you ever feel like yourself this season?"

Russ: "Ahh… Very rarely. There were times and spurts, but I was just trying to find my way honestly." pic.twitter.com/2CwYvIjwgx

Westbrook rarely held himself responsible for his poor season. Instead, he blamed everyone else for not making him comfortable and enabling him to thrive. The problem isn’t his conduct to reporters; it’s that that stubbornness pervaded the locker room, film room, and on the court. That negative energy was palpable throughout the season and cast a pall over the team. Fittingly, his (likely) final press conference with the Lakers had the same vibe. Frankly, it was a baffling masterclass in delusion.

Westbrook did not reveal if he would pick up his $47 million player option, though he’s widely expected to do so. Last week, Westbrook said “the plan” was for him to return, though he admitted that “nothing is promised.” Westbrook indicated in his presser that he never felt comfortable or welcome in his hometown.

“I would probably say the only thing that was a problem or issue was with just the reception I got from people here, for any reason, whatever that may be,” he said. “Whether it’s the fans or whatever, it wasn’t so great. But that’s not up to me to judge or of any sort. Just kind of came to work, did my job.”

Pelinka was vaguely noncommital about Westbrook’s future in Los Angeles.

“Like any player, we’ll partner with him after that decision is made about what’s best for his future. Rest assured, we’re going to look under every stone for ways to be better and be open to anything that will improve our team and will put us in a position to compete at a higher level next year than we did this year.”

3) LeBron seems to be sticking around

Pelinka expressed a steadfast belief that LeBron wants to remain with the Lakers for the foreseeable future.

“Every indication that we’ve received is that he sees the Lakers as his home. The feeling is that he loves being a Laker and sees this as a long-term home and that’s been made loud and clear. … He feels, in my exit meeting with him, highly motivated to return next year and have another elite, elite level of play … and his motivation to come back and do that next year is palpable.”

LeBron is eligible for a two-year extension in August. Both LeBron and Pelinka dodged questions on LeBron’s intentions via CBA stipulations.

“Technically, because of the collective bargaining agreement it cannot even be discussed until later on in the year,” LeBron said. “So, we get to that point, we’ll see.”

LeBron said he wants “to help this franchise become a champion once again.”

We also got an injury update from LeBron. The 37-year-old said an MRI on Friday revealed that he will not need surgery or injections on his sprained left ankle, but it will require at least four weeks of rest. He has upcoming appointments for his left knee and groin and hopes to avoid surgery.

As for the scoring title, James said it would have been “beneath me” and the “wackest thing ever” to chase an individual achievement on a bum ankle once the Lakers were eliminated from playoff contention. LeBron also shed light on how long he intends to play and took the high road when discussing his experience with Westbrook.

4) Pelinka and LeBron tried to clarify the hierarchy

The Lakers and LeBron seemed intent on dispelling any confusion about who’s in charge, which has become a running gag or troubling concern, depending on your fandom and sense of humor.

Unlike 2021 exit interviews — when Pelinka said the Lakers planned on bringing back their homegrown core, including Kyle Kuzma and Alex Caruso — the GM declined to delve into specifics about roster-building plans. However, he did repeatedly insist that he was in charge of basketball operations.

“The roster decisions ultimately rest on my shoulders. And I will take input from LeBron and Anthony as our two captains. I have done that during my entire tenure. But at the end of the day, I think I’m the one who leads the basketball operations department and will take ultimate accountability for the roster decisions that are made.”

LeBron seemed intent on distancing himself from organizational decisions. I counted four instances — including in his first answer — in which James said roster decisions lie with management.

“It’s not my decision to sit here and say, ‘Well, this is what we should bring back and have on the roster. That would be the front office’s decision. And, obviously, they may ask my input, but at the end of the day, they’ll make the decision they feel that best suits this franchise going forward.”

Pelinka framed his partnership with LeBron (and AD) as a productive collaboration. In February, he irked the Klutch camp by falsely claiming the stars supported his decision to stand pat.

“LeBron James is a player that’s on the Mount Rushmore of basketball, and every season of his 19 so far has to be looked at as a precious commodity,” Pelinka said. “And we need to do all we can to be caretakers of his legacy and to try to build the best team we can around him. And that’s something that we had the objective for that last year and, obviously, this roster did not work. But there’s a great level of trust in our collaboration with him to make sure we get it right this summer and fix it.”

Kurt Rambis’ name was oft-mentioned on Monday as an ubiquitous force in basketball operations. That won’t be music to the ears of Lakers fans, but the fact that Pelinka mentioned Joey and Jesse Buss as integral management figures will be.

Pelinka — who has made multiple appearances on Woj’s podcast over the years and was a source for him from his agent days — laughably dismissed the idea that the Lakers’ handling of Vogel’s firing was embarrassing for the franchise or handled incorrectly.

“In terms of media reports that are speculative and unsourced, we don’t spend any of our time reacting to that type of information,” he said. “We don’t respond to unsourced media reports, and in terms of the timing our decision, we’re going to keep that internal.

Pelinka added that Vogel “factually” learned of his firing on Monday in person. That’s comical for many reasons, particularly the labeling of a correct report from the most sourced NBA scoop-man — which Pelinka opened the press conference confirming — “speculative.”

6) The Lakers hope to have a coach soon

Woj reported the Lakers’ coaching search will be “extensive” and there are no clear front-runners. Pelinka said the Lakers need a “strong voice” who can “inspire” superstars. He said the Lakers hope to have a coach by the 2022 NBA Draft on June 23 (here are some names to watch).

We’ll see how the Lakers’ treatment of Vogel — the low-ball contract, the lame-duck extension, the constant leaks about his job status — affect their ability to lure elite talent, such as Nick Nurse (a Klutch client). Quin Snyder reportedly lost interest based on the Vogel situation.

7) Kendrick Nunn will pick up his option

Kendrick Nunn says he'll pick up his $5 million player option for next season:

“Knowing I just took this entire year off, it’s a no-brainer for me to opt-in.”

Dwight on if he wants to stay with Lakers: "I don't want to leave…Love being here."

"I feel like I got a lot more years in me." He cited improved technology and a better understanding of how to take care of his body, adding that he wants to "go out with a bang."

The fellas from rural Arkansas both set career highs in Denver. Truthfully, they represented the lone wire-to-wire bright spots of a dreadful Lakers season. On Monday, they had, by far, the two most upbeat pressers of the day.

Both wings expressed gratitude to the veterans for making them better players and shared their unabashed enthusiasm and joy to have hooped for the 2021-22 Lakers.

Monk said he hopes to return to Los Angeles next season, though he may have to surrender money to do so. Either way, the Lakers need more youth and positive energy next year.

Johnson is an elite talker. In stark contrast to Russ, Stanley has been consistently introspective when lamenting the Lakers’ failures. Monday was no different.

Stanley Johnson, who is always openly self-critical, says the Lakers players have to look in the mirror, acknowledge what they did wrong, and take those lessons into next season. Slightly different message than we heard from Russ…

“We’re wearing the jerseys, we’re the ones playing … there ain’t nobody else that is going to come in and change it for us,” he said, calling out their porous defense. “Every game 130? Every game? That’s on us.”

Enlightening stuff from Stanley Johnson when asked by @KamBrothers about how he's adjusted from high school phenom to NBA role player: pic.twitter.com/lRsJHIC6lz

Johnson said he doesn’t know if he’ll be back with the team, but certainly hopes to be. The Lakers shouldn’t think twice about it.