The Philadelphia Eagles have done an impressive job rapidly growing into a contending team. The franchise had a rapid turnaround following their 4-11-1 season in 2020. In the first year with Nick Sirianni at the helm, the Eagles went 9-8 and punched their ticket to the postseason.

Following the successful year, the team had an impressive offseason in which they added AJ Brown and several notable defensive players. The pieces have been put around Jalen Hurts and it is time for the quarterback to prove if he is the true franchise quarterback. While the roster has already improved a great deal, the effort to get better should never stop. GM Howie Roseman is never one to sit back and watch if there is an opportunity to improve. Here are three potential trade candidates to keep an eye on with Eagles training camp right around the corner.

When Andre Dillard was drafted with the 22nd overall pick in the 2019 draft, expectations were fairly high. The offensive tackle was expected to take over the starting role once Jason Peters retired but this has not been the case. Dillard has started a total of just 9 games since coming to the NFL. His potential job was snatched up by Jordan Mailata who has proven to be one of the most impressive offensive linemen across the NFL.

Despite the run-dominant offense the Eagles run, it was a disappointing season for Miles Sanders last year. The third-year back ran for the lowest yards of his career and failed to reach the endzone throughout the entire season. While Jalen Hurts is the X-factor for how good the Eagles can be, the team will rely heavily on the run game regardless. Injuries played a role in his ineffectiveness, but it was clear that Miles Sanders may not be the perfect fit for the Eagles’ scheme.

The team had much more success with Boston Scott, Jordan Howard, and Kenneth Gainwell running the football. The shake-and-back nature of Sanders’ running style does not always match the downhill running the offense demands. While Sanders had some nice flashes and ran for over 100 yards in Weeks 13 and 14, he is no longer the indispensable offensive weapon it was once thought. The value of running backs has diminished a great deal in recent years. However, if a team is searching for a new featured back, expect the Eagles to give consideration to moving Sanders.

Jalen Reagor has had a rough start to his NFL career. After being drafted with the 21st overall pick in the 2021 draft, expectations were high for the TCU product. Through two seasons in his NFL career, Reagor has recorded just 64 receptions for 695 yards. To make matters worse he has seen a number of wide receivers drafted get off to impressive starts to their careers.

The Eagles shifted gears and attempted to get Jalen Reagor more involved in special teams. Having your former first-round pick serve as a punt and kick returner is not ideal for a franchise. It also feels as much more of an avenue to get him on the field rather than something he naturally excels at. Reagor muffed a punt shortly after halftime in the Eagles matchup with the Bucs in the Wild Card round last season. While this was far from the reason the team lost, it certainly was a shot to their momentum of getting back in the game.

Sometimes players just need a fresh start and it feels this is the case with Jalen Reagor. The additions of AJ Brown and DeVonta Smith have made Reagor irrelevant in the passing game. Flipping the 23-year-old for a draft pick might be the best move for both sides. There is still plenty of time for him to right his career but the feeling seems to be it will not occur in Philadelphia. Expect the Eagles to be active in searching for a trade as he is undoubtedly their most moveable piece. 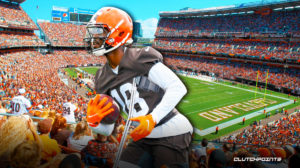