The San Francisco 49ers quarterback battle likely isn’t going to be decided for some time. The 49ers did release Josh Rosen, clearing up the quarterback room a bit, but Trey Lance and Jimmy Garoppolo are still battling it out with a few weeks to go until the regular season starts.

Head coach Kyle Shanahan had an honest take on the situation, according to Myles Simmons of Pro Football Talk.

“They’re competing their ass off. They’re doing a good job…They both bring different elements to our team. Both of them, I believe, can play at a high level and I’m trying to see which one does that the best for us.”

The 49ers took Trey Lance with the third overall pick in the 2021 NFL Draft, spelling the end of Garoppolo’s reign at some point in San Francisco.

But, it might not be now apparently, as Garoppolo has played well in camp and the preseason thus far. Lance has also played well, so who knows what happens when the season rolls around. 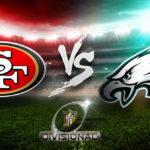 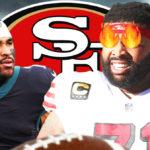 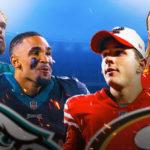 The 49ers take on the Los Angeles Chargers on Sunday and both quarterbacks will look to continue their strong play.