Aaron Rodgers, 3 Packers most to blame for Week 8 loss vs. Bills 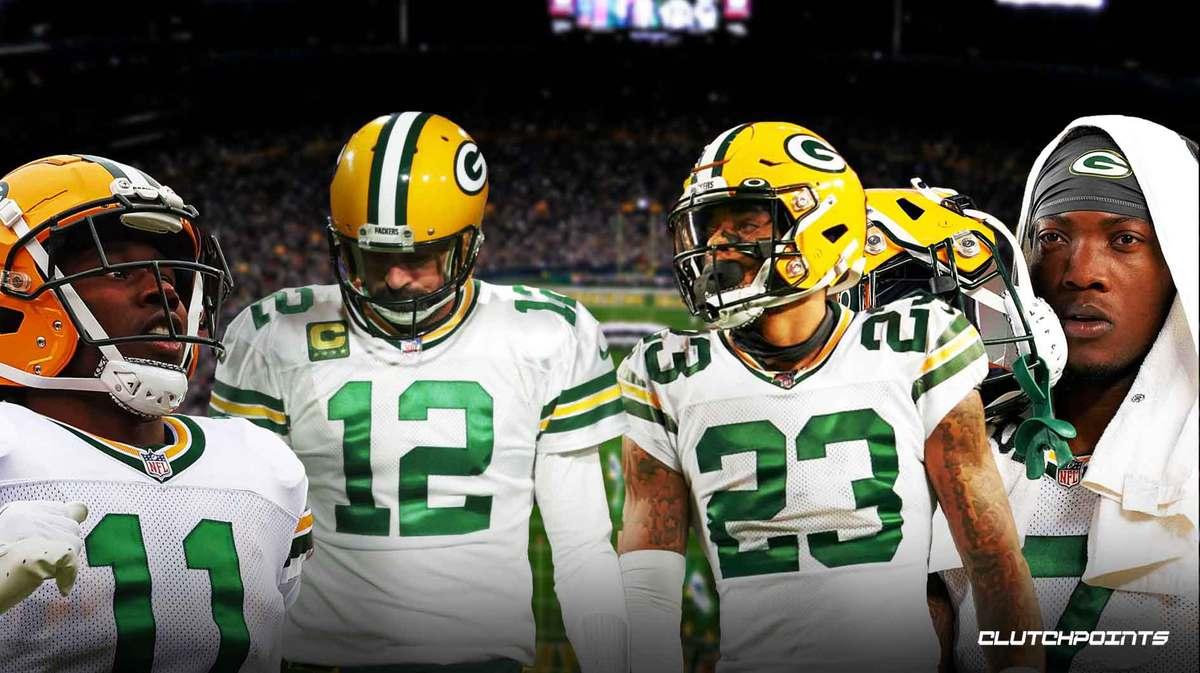 The Green Bay Packers Week 8 loss to the Buffalo Bills marks the team’s fourth consecutive loss on the season, dropping Aaron Rodgers and company to 3-5 on the year. There is no shame in losing to the Bills, possibly the best team in the NFL right now, but the Packers had their chances, and they couldn’t come through when it mattered most. In addition to Rodgers, several other Packers players like Jaire Alexander, Quay Walker, and Sammy Watkins, also played a role in the loss. Here is why these four players are most to blame for the Packers Week 8 loss to the Bills.

The Packers have a crisis at the wide receiver position. Randall Cobb is on IR with an ankle injury, Allen Lazard missed the Packers Week 8 game with a shoulder injury, and rookie second-round receiver Christian Watson left the game with a concussion after one catch for 12 yards.

With all these players out, offseason acquisition Sammy Watkins needed to step up and be a leader on the Green Bay offense. Instead, what did he do? Watkins had just one catch for three yards all game.

Some of that might be on Aaron Rodgers (more on that below), but when you are a veteran WR on a unit that is hurting mightily, you need to step up and get open for your quarterback. Watkins simply didn’t do that Sunday night.

Against the Bills, fourth-round pick Doubs and seventh-round pick Toure stepped up, and both caught touchdowns. Everyone else was hurt or ineffective, including Sammy Watkins.

When you start the game by talking trash with Stefon Diggs in the tunnel on the way to the field, you better back it up with your play. Jaire Alexander did have a pick in the fourth quarter that ended up getting the Packers within 10, but Diggs clearly won the battle, with six catches for 108 yards and a touchdown.

Jaire Alexander and Stefon Diggs were all up in each others faces as the #Packers and #Bills ran onto the field. pic.twitter.com/dUibcc3Vkl

Alexander and Rasul Douglas — who had a lot to say about the Bills offense before the game as well — played OK, but they couldn’t stop the Josh Allen machine from putting up 27 points and winning the game in a relatively comfortable manner.

This trash talk from a 3-5 team to a 6-1 team doesn’t seem productive, and it set the tone for a chippy game that ultimately hurt the Packers. It’s not unreasonable to think that the tone set by the Packers defensive backs led to the Quay Walker situation, which also contributed to the loss.

Rookie first-round linebacker Quay Walker is a key piece of the Packers defense this season and was on his way to a good game vs. the Bills in Week 8. He had five tackles through 21 minutes of game time before inexplicably pushing a person on the Bills sideline who was helping him up and promptly being ejected from the game.

The score was 14-7 at the time, and the Bills promptly went down the field and scored what would be the game-winning touchdown after Walker’s ejection.

Quay Walker has been ejected pic.twitter.com/JY88qEwD52

There is obvious frustration right now in Green Bay, but getting kicked out for a silly push is something you just can’t do if the team hopes to right the ship in the back half of the season. Walker is young, so hopefully, this will be a teachable moment.

However, now he’s on the NFL and the referees’ radar, so he needs to be careful from here forward. If not, he could get a reputation that will affect his whole career.

Aaron Rodgers had another poor game in the Packers Week 8 loss to the Bills. He was 19-of-30 for 203 yards with two touchdowns, two sacks, and an interception.

Sure, you can blame it on his wide receivers (and we do above), but at some point, the buck stops with the quarterback.

Rodgers can still let it loose with the best of him. He made one deep ball throw to Romeo Doubs that looked like it was shot out of a cannon. However, when the DB broke up the play, Rodgers threw his hands in the air, visibly frustrated with his rookie WR.

However, on the replay, you can clearly see that Doubs had his man beat earlier, and Rodgers waited on the throw. By the time he did let it go, Doubs had to slow down to get under the ball, giving the Bills time to make the play.

This is a perfect example of what’s wrong with Rodgers.

He still has most of the physical tools, but he’s either off by a hair this year or doesn’t have the trust in his wideouts to make the throws he should, and that’s what’s bogging down the Packers offense. If the answer is the latter, that’s on him, too.

After not playing in the preseason, Rodgers can’t seem to understand why he doesn’t have chemistry with his WR corps yet. And while he likes to blame everyone else — from his teammates to the coaching staff — until the QB realizes how much of this is his fault and changes how he operates, things won’t get better for the Packers.