The Los Angeles Angels decided to keep Shohei Ohtani on the roster past the recent MLB trade deadline. Now, Angels general manager Perry Minasian is set to soon deal with quite a dilemma regarding Ohtani’s long-term future on the team.

Ohtani is under team control with the Angels for a mere one more year, as he will be arbitration-eligible for the 2023 campaign. Around the league, there is already speculation that Ohtani will opt to leave the Angels once he hits free agency.

The New York Post’s Jon Heyman relayed a prediction from one rival executive in the majors that Ohtani will be “out the door” when his current contract is up.

The Angels’ call to not ship off Ohtani ahead of the trade deadline came at the request of team owner Arte Moreno. Heyman added that Moreno “didn’t even want to hear offers” for the reigning American League MVP Award winner. One factor behind Moreno’s decision on this matter centered on the fact that both Mike Trout (back) and Anthony Rendon (season-ending right wrist injury) are currently sidelined due to their respective ailments.

Heyman also noted that multiple teams “checked in” on the possibility of trading for Ohtani. Among them, the New York Yankees did submit a “serious offer” for the two-way superstar.

The Angels have at the least attempted to come to terms with Ohtani on a new contract agreement. The Athletic’s Ken Rosenthal reported in June that the Angels had “informal discussions” with Ohtani’s agent, Nez Balelo of CAA, about an extension deal for the slugger late in spring training. Such talks between the two sides “never gained traction.”

Ohtani has built off of the momentum from his AL MVP-winning campaign, as he is on track for a second consecutive 30-plus home runs year and also sits at a career-high in strikeouts per nine innings (13.0).

For now, Ohtani’s future with the Angels is slated to be among the storylines to watch in the offseason later this year. 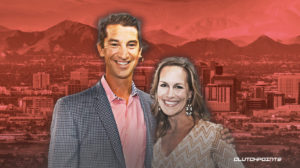