Biggest key for New York Jets in Week 2 against Browns When you’ve won as few times as the New York Jets have in the past decade there’s never just one key to winning a game. However, when they play the Cleveland Browns in Week 2 Sunday, there’s one obvious thing the Jets must do to give themselves a chance at winning the game.

The Browns rushed for 217 yards in their Week 1 win against the Carolina Panthers. That was second most by any team in the opening week of the NFL season. Nick Chubb rushed for 141 yards on 22 carries (6.4 yards per carry) and Kareem Hunt had 46 yards on 11 carries (4.2 yards per rush) and a touchdown.

Nick Chubb hopping, skipping and jumping his way down the field pic.twitter.com/WddW3ve7DG

That’s an elite pair of runners to contend with.

To win the battle against Chubb and Hunt, and ultimately the war against the Browns, the Jets believe they need to be extremely physical. As defensive coordinator Jeff Ulbrich said about containing Chubb, in particular, “It’s not surviving this guy, it’s punishing this guy.”

Chubb is a bruising 5-foot-11, 227 pounds. He’s in his fifth NFL season and has averaged 5.3 yards per carry, rushing for 1,000 or more yards in three straight seasons. He has 36 career rushing touchdowns, at least eight in each of his four full seasons.

Plain and simple, he’s a bull.

"We've got to go in with our big boy pads on"

The Jets defense was ranked 29th against the run last season. But they did an excellent job against the Baltimore Ravens in Week 1. New York held Lamar Jackson and company to 63 yards on 21 carries (3.0 yards per rush), third best in the league in the first week of the season. It should be noted that the Ravens are the top rushing team in the NFL since 2018, averaging 173.7 yards per game.

Lineman Quinnen Williams played a huge role in shutting down Baltimore’s running game. Although he finished with three tackles, Williams routinely tied up multiple blockers, allowing others to make plays defensively. Williams was given an outstanding 92.1 grade by Pro Football Focus. Fellow lineman John Franklin-Myers also graded extremely well (79.9 overall) and rookie Micheal Clemons had a 71.6 grade against the run.

Ulbrich said he thought the Jets defense played with an edge in Week 1. Despite the loss he was very happy with how his unit played. Ulbrich singled out linebacker Kwon Alexander, who had three tackles, as the “guy that unhinges us.”

It’s imperative the Jets contain the Browns running game because quarterback Jacoby Brissett doesn’t scare them. Brissett, who is QB1 since Deshaun Watson is suspended the first 11 games, was 18 – 34 (52.9 percent) for 147 yards and one touchdown last week. Pro Football Focus gave Brissett a grade of 46.9, 29 out of 33 NFL quarterbacks. His average of 4.3 yards per pass ranked 32.

The Jets got great play from corners D.J. Reed and Sauce Gardner in Week 1. That’ll make life more difficult for Brissett. And the Jets would love to turn up the heat on Brissett with edge rushers Lawson, Franklin-Myers, Clemons and Jermaine Johnson leading the charge.

But it all starts with stopping the Browns running game. That is the biggest key for the Jets in Week 2. 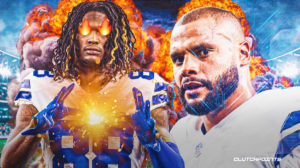