‘I would be booing myself’: Nathaniel Hackett’s shocking take on Broncos fans booing home team vs. Texans The Denver Broncos finally got their first win of the Russell Wilson-Nathaniel Hackett era in Week 2, but it wasn’t pretty. Facing a lowly Houston Texans squad, the offense once again struggled to score in the red zone. They only managed one touchdown in the entire game: not a great sign against a team that went 4-13 last season.

As a result, many Broncos fans in attendance started booing the team in the fourth quarter after several miscues. Speaking to reporters after the game, Hackett addressed this behavior by the fans. The Denver coach said that he was frustrated by the lack of TDs in the red zone, but says that the fans were justified in their booing. (via ProFootballTalk)

“I would be booing myself,” he told reporters after the 16-9 win. “I was getting very frustrated. We (Broncos) get down to the red zone two times. Don’t get another touchdown, which is unbelievably frustrating. I don’t think we have scored in there yet. That’s something that all of our guys have to step it up. Whether we run the ball more, whatever we’re doing, we just have to execute at a higher level.”

The Broncos offense was supposed to be a juggernaut with the addition of Russell Wilson and Nathaniel Hackett. They already had a great rushing attack: all they needed was a QB to sling it to the great receivers on the team. However, it’s clear that they are still going through growing pains to start the year.

Broncos fans are hoping that the team gets all of the struggles out of the way to start the year. If they continue to struggle after a month or so, though… that could spell disaster. 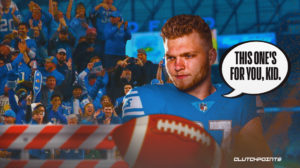