The Seattle Seahawks defense was on fire against the Denver Broncos, shutting down the Broncos offense led by former Seahawks star Russell Wilson. The Seahawks backline was suffocating, denying the Broncos multiple golden opportunities to score in the second half, as Wilson and his squad failed to capitalize on seven plays from within the nine-yard line in the third quarter alone. It’s a bit disingenuous to just chalk that up to Broncos errors, as the Seahawks defense was all up in Denver’s grill from minute one.

Former Los Angeles Chargers linebacker Uchenna Nwosu played a huge part in the Seahawks’ masterful performance, causing fumbles and wreaking havoc on the Broncos’ O-line but in the end, the Broncos still had an opportunity to take the game, and it was in the hands of Wilson, the Broncos’ $245 million man, to get Denver in a more advantageous position on the field.

But in the end, it was Broncos rookie coach Nathaniel Hackett who stole the headlines, allowing the clock to run down from 1 minute, 11 seconds to 20 seconds before calling a timeout to set up a 64-yard field goal instead of putting the ball in Wilson’s hands. Uchenna Nwosu was as baffled as the entire Seahawks team with the decision, and he thought that there might be something more alarming going on between the Broncos coaching staff and Wilson.

“Russ is so dangerous in short yardage, so when they took him out of the game and brought in field goal I was like ‘Maybe they don’t trust him in that situation.’,” Nwosu said, which should be cause for concern for Broncos fans who have had high hopes since Wilson’s acquisition.

Surely enough, the Broncos’ field-goal attempt missed wide of the target, and the Seahawks emerged victorious. Lots of criticism will be directed towards Hackett, but as a rookie coach, he can certainly use this as a learning experience.

For Broncos fans, however, here’s to hoping that Uchenna Nwosu is incorrect by thinking that the perplexing late-game decision made by Hackett signifies some trust issues that are brewing between him and his star quarterback. 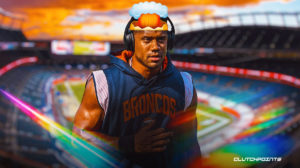