The Denver Broncos are reportedly ready to go “all-in” to trade for Aaron Rodgers if he wants out of the Green Bay Packers. That means they are prepared to give a significant package to land him.

How significant is it? Well, according to reports out of Denver, the Broncos are willing to offer their ninth overall pick and second-round selection in the 2022 NFL Draft, as well as their 2023 first round pick for Rodgers. The Pittsburgh Steelers and Tennessee Titans have also been linked with the Packers QB, so they will need to make a better off than the Colorado-based franchise if they want a shot at getting him.

So, reports out of Denver are that the Broncos are ready to offer the 9th pick this year, their second-round pick this year and next year’s first for Aaron Rodgers. To beat that, the Steelers would have to offer more. Anyone really believe that’s happening? Or prudent?

Of course that all depends whether Aaron Rodgers wants to be traded or not. The Packers continue to hold out hope that they’ll be able to retain the reigning MVP, but if he does end up asking for a way out, Green Bay will surely have a line of suitors interested in him.

Fortunately for the Broncos and everyone involved, it might not be long before Rodgers makes his decision on his future in Green Bay. He is rumored to make an announcement on Tuesday afternoon, which should give clarity on what the Packers will do in free agency.

For now, fans will have to wait until Rodgers makes things official. 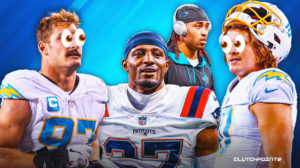 JUST IN: Chargers ‘could be in the mix’ for Stephon Gilmore, JC Jackson in free agency
Related TopicsAaron RodgersBroncosPackers