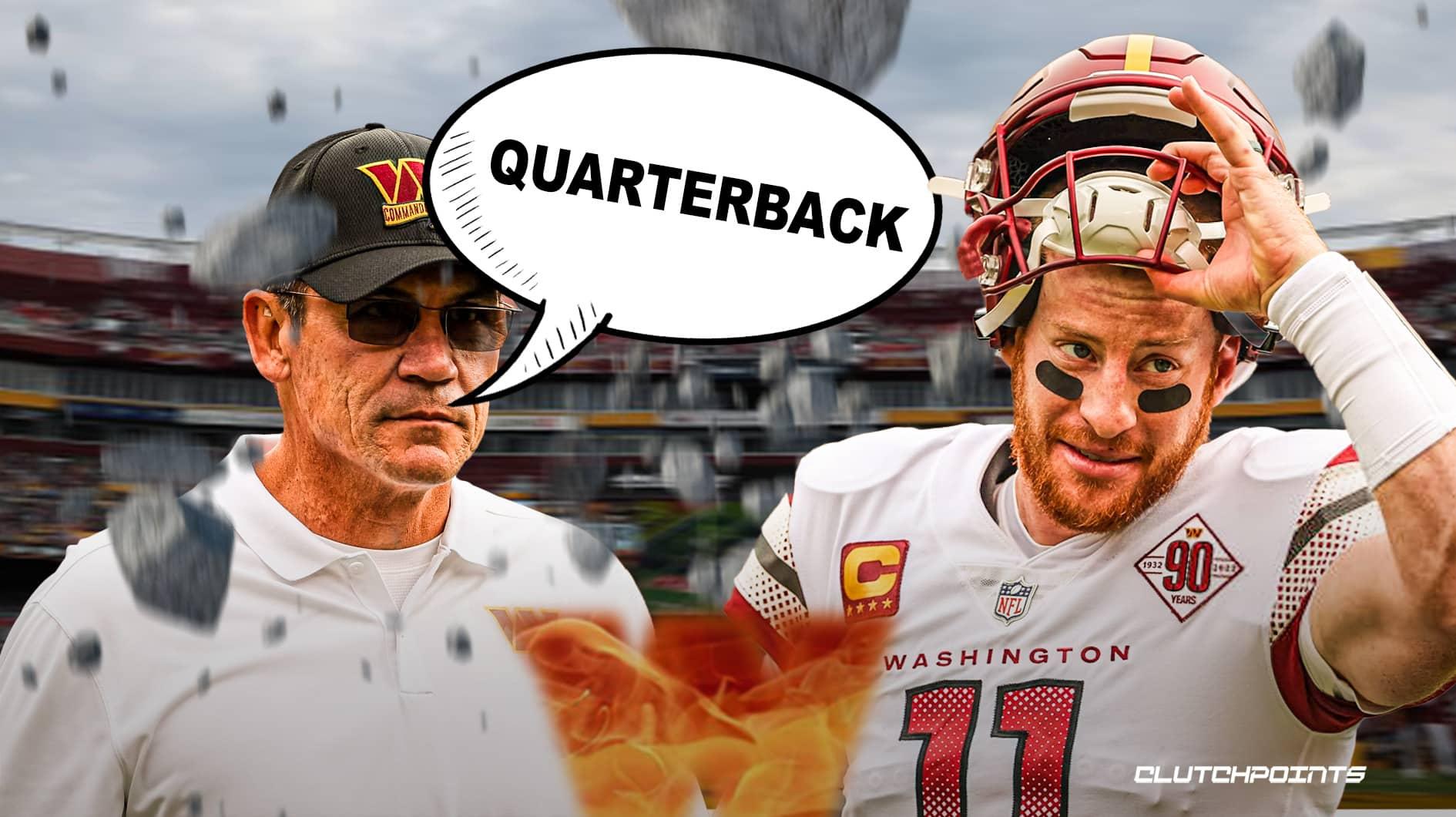 As tough as it may be to admit, the Washington Commanders are not a good football team. Their defense has allowed at least 21 points in all five games of the 2022 NFL season so far, surrendering an average of 25.6 per game, and their offense hasn’t been able to pay off that tab on the regular, as their 1-4 record clearly shows.

While it would be foolish to blame this 38-point differential on any one player, the consensus goat – in the bad, Peter King sort of way – has widely been Carson Wentz, the one-time Philadelphia Eagles quarterback who was acquired during the offseason from the Indianapolis Colts for the low-low price of a second-round swap plus a 2022 third-round pick and a 2023 conditional third-round pick.

When asked about what separates his team from the rest of the NFC East, who have two collective losses among them, Ron Rivera gave a one-word answer that will surely draw attention from the greater football world well beyond the greater DC metropolitan area: Quarterback.

Welp, there you go, folks; dust off your Taylor Heinicke jerseys and, to paraphrase Russell Wilson, ‘let’s ride.’ After Wentz’s performance in Week 5, which saw the quarterback throw an ugly interception on the final drive of a four-point game to snatch loss out of the jaws of victory, old “Riverboat Ron” is cashing out on his poor playing player in the hopes of saving the season, not to mention his job.

Whoa, whoa, whoa, not so fast, friends, for that wasn’t all Rivera had to say on the matter. No, according to Ralph Vacchiano of Fox Sports, the Super Bowl-winning head coach had a bit more to say about his battled signal-caller.

When asked if his team has any regrets about choosing Wentz over, say, Jimmy Garoppolo, Rivera said “no.” “The way he performed yesterday?” Rivera said. “Shows you what he’s capable of.”

“Our QB’s done some good things and he’s had a couple games where he’s struggled. … Most of the time he’s very solid. … But the way he performed yesterday? Just shows you what he’s capable of. We chose him because we believe in him.”

Once Rivera left the podium, and Wentz took his place, the well-traveled veteran quarterback was asked about his loss-clinching interception and gave a very interesting response, as passed along by NBC Sports.

“The guy made a heck of a play,” Wentz said postgame. “At least from my vantage point, it looked like he was covering Terry [McLaurin] a little bit on the crossing route. I just tried to squeeze it in there to J.D. … I thought we had six points when it left my hand. The result, that was unfortunate.”

“Obviously a bit of an emotional rollercoaster there,” he said. “You’re feeling very confident in your ability to go down and you’re moving the ball, converting, staying on the field. You get first-and-goal from the two and you’re thinking ‘we got this, we’ve got a couple chances here.’ Hats off to them, they made a couple of good plays. It’s definitely frustrating and it stings a little bit extra just because I thought we had it there.”

Unfortunately, Rivera has learned the same lesson that both Doug Pederson and Frank Reich have learned before him: while Wentz can throw for a ton of yards and string together plays and even drives that look very good, his on-field issues will forever plague a team looking to win a game through the air.

"Why are the other NFC East teams ahead of you?"