Anthony Richardson’s college football legend is only just beginning. The Florida football quarterback led his team to an impressive home victory over 13th-ranked Utah in Week 1 of the 2022 season, completing 17-of-24 passes for 164 yards while doing most of his damage on the ground, finishing with 106 yards and three scores on just 11 carries.

Richardson has a golden opportunity to bolster that momentum on Saturday in a marquee matchup against the Kentucky Wildcats. Even before proving himself versus star Wildcats signal-caller Will Levis, though, first-year Gators head coach Billy Napier was already comparing Richardson to a pair of former SEC quarterbacks who wreaked havoc on opponents through the air and on the ground.

Appearing on the SEC Network prior to Saturday’s kickoff, Napier said he sees flashes of both Cam Newton and Dak Prescott in Richardson’s game.

Newton took college football by storm during his lone season at Auburn in 2010, winning the Heisman Trophy while guiding the Tigers to their first national championship since 1957. He was the first overall pick of the 2011 draft, winning 2015 NFL MVP and leading the Carolina Panthers to Super Bowl 50 before injuries began taking their toll, leaving Newton unsigned at kickoff of the 2022 season.

Prescott, on the other hand, is still in the the thick of his prime with the Dallas Cowboys after starring at Mississippi State from 2012 to 2015. He earned First Team All-SEC honors as a junior and senior, leaving the college ranks as one of the most productive quarterbacks in conference history.

It remains to be seen if Richardson will ultimately follow in the large footsteps of Newton and Prescott. He’s a first-year starter for the Gators, after all, still honing the nuances of quarterback play at the highest level of college football. But there’s no doubting his talent, as evidenced by Richardson ranking among the top prospects at his position in the 2023 NFL draft.

If his season-opening effort with is a sign of what’s to come, don’t be surprised if Richardson is QB1 in the 2023 draft cycle by season’s end, after reinvigorating Florida football. 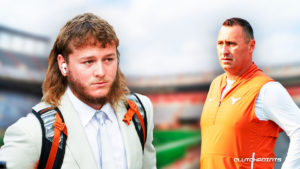