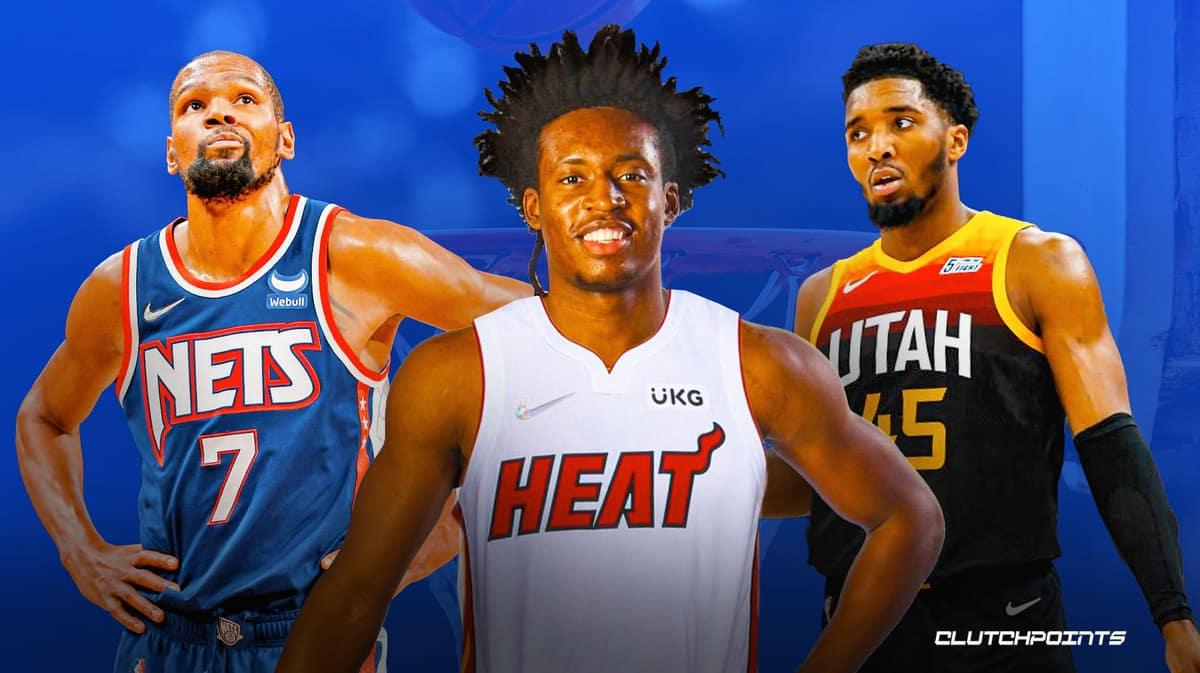 Desperately trying to bring a fourth title back to South Beach and doing all they can to maximize Jimmy Butler’s championship window, the Miami Heat are currently targeting two of the best players in the game. As they continue searching for ways to bring either Donovan Mitchell or Kevin Durant down to Miami, it seems that they’ve yet to gain any traction on this as of yet.

In the case that a trade for neither of these superstars pans out, there are still plenty of other players out there for the Heat to pursue. Plus if they’re hoping to win back the Eastern Conference and bring home the title  in 2023, then they’ll need to surround Butler and Bam Adebayo with more size, length, and scoring. On that note, let’s take a look at six players the Heat must target if a deal for Durant or Mitchell falls through.

Currently a restricted free agent and still yet to sign an offer sheet, Collin Sexton is a player the Heat should definitely make a play for this offseason. He’s a promising young guard with a ton of upside to his game who would give Miami a major boost in their backcourt. Sexton did miss most of the 2021-22 NBA season for the Cleveland Cavaliers with a torn meniscus just 11 games in. However, he’s had plenty of time to rest and recuperate. Plus with Miami’s top-notch training staff, Sexton would be able to stay in peak form and keep healthy.

Still just 23 years old and averaging 24.3 points per game, Sexton would be a high value addition and an absolute steal for the Heat. Sexton could also be a future building block for the Heat alongside Adebayo, Tyler Herro, Gabe Vincent, Max Strus, Caleb Martin, Omer Yurtseven, and Nikola Jovic. The Cavaliers have recently made a 3-year, $40 million contract offer to Sexton, but it doesn’t seem likely that he’ll be accepting this offer. So the Heat should make a valiant effort to strike while the iron’s hot.

This would be the perfect back-up plan for the Heat if they fail to land KD. Plus Kyrie Irving’s future with the Brooklyn Nets has been up in the air for quite some time now. When locked in and fully focused, Irving is still one of the most skilled players in the NBA, his elite handles, playmaking, and clutch scoring abilities are truly unmatched.

If he’s healthy and committed, he’s the ultimate difference maker and on the Heat he’d form a lethal superstar trio with Butler and Adebayo. He’d also give them another reliable shooter outside of Butler who could take over the game for them on offense. Granted Irving has also been prone to being a defensive liability.

On the flip side, the Heat have been one of the most sound defensive teams in the league over the past several seasons. So Irving would vastly improve his play on that end of the floor as well. Irving has also had his off-court and locker room issues, but with Miami’s zero tolerance policy for off-court antics and toxic behavior, they’d be able to set him straight and keep him productive. It may not seem like it now, but this is one move that could catapult the Heat to another title run.

In the early goings of 2022 NBA free agency the Philadelphia 76ers signed P.J. Tucker to a 3-year, $33 million deal. This now has all signs pointing to Matisse Thybulle’s potential exit from the team. The Sixers have also been rumored to be shopping the versatile forward of late. On the Heat, Thybulle would be able to come right in and make an immediate impact. His defensive prowess, speed, agility, and slashing ability would make him a welcome addition to the Heat culture.

Thybulle would also become a more well-rounded scorer playing alongside the likes of Butler, Adebayo, and Herro. His size and length would be vital for the Heat as they’ve boasted one of the thinner frontlines in the league over the past few years. So if Philly doesn’t want him, Miami should step right up and make a trade for him.

With the Indiana Pacers ready to move on from Myles Turner and the Miami Heat in dire need of a reliable presence at the center spot, this seems like a match made in South Beach. As a multi-skilled big man that can thrive playing center or power forward, Turner’s game would be a perfect fit for Erik Spoelstra’s innovative style of position-less basketball.

His rebounding, shot blocking, and ability to space the floor with his versatile offensive game would open up an endless amount of scoring opportunities for Butler, Adebayo, and Herro. On the other end of the floor, the Heat would have the most complete defensive unit in the league and be a nightmarish cover to opposing offenses. If the Heat want to solve their issue at the center spot, then they should begin trade negotiations with the Pacers to acquire Turner.

As a highly productive young center on a San Antonio Spurs squad that’s in a transitional period, it may be in Jakob Poeltl’s best interest to seek a trade out of the lone star state. Enter the Miami Heat, a team that’s built to contend in the present and needs a strong low-post presence. Poeltl would help them out a ton on the glass and give them a lob threat to work with.

Poeltl would also do well in the pick-and-roll game allowing them to become a more efficient scoring team in the paint. In addition to all of this, Poeltl could provide the Heat with quality rim protection and active hands to disrupt the passing lanes. For Miami, this is another young center who would elevate their play on both ends of court and be an absolute game changer for them.

Coming off a few disappointing seasons while having played for the Los Angeles Lakers, Boston Celtics, and Houston Rockets, Dennis Schroder could be an impact player for the Heat. When fully healthy and on his A-game, Schroder can be a lethal two-way player for any team he’s on.

Whether he’d be in a reserve or starting role for Miami, Schroder would do wonders as a facilitator, playmaker, and pesky perimeter defender. It may not seem like it, but Schroder could be an asset for the Heat and his aggressive style of play would do wonders for them – especially come playoff time.