“I don’t know if its about proving people wrong rather than proving myself right,” Becky Hammon said. “I go where the opportunity presents itself, where I’m wanted. The Aces made it very clear they wanted me to be their head coach… you don’t win anything if you don’t have great players. We can start there. It was something that I felt I could provide the missing pieces so to speak. One of my buddies put it, ‘Just because you got ingredients doesn’t mean you can cook,’ and so I thought I had the right ingredients … to win with this team and win a championship.”

Becky Hammon is developing quite the coaching reputation. She was already a member of the San Antonio Spurs’ coaching staff, and her good work in San Antonio alongside Gregg Popovich led to the Aces’ interest in her.

In addition to winning the WNBA Finals, Becky Hammon was also named the 2022 WNBA Coach of the Year. There is no question that she has a bright future in the league. However, Hammon is not someone who will be content with one championship. Fans can expect the Aces to run things back next year and strive for another WNBA Finals victory. 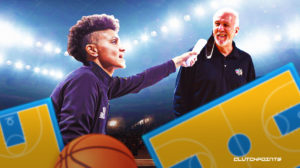