New York Jets quarterback Zach Wilson made an emphatic return to action on Sunday for his 2022 NFL season debut. He helped the Jets pick up a win over the Steelers and even caught a touchdown pass in the process, to which he celebrated with a hilarious attempt at the Griddy. On Tuesday, Wilson took to Instagram to ask Justin Jefferson for his two cents on the touchdown celebration, posting a hilarious side-by-side video of the two doing the Griddy.

“Hey Justin, what you would you rate my Griddy?” Wilson asked via Instagram. Within a few minutes, Jefferson chimed in saying and graded the Wilson Griddy as being a 9/10. Certainly a solid score for a first-time Griddy-er.

Wilson was clearly feeling himself after leading the Jets to a comeback win over the Steelers. After struggling to start the game, Wilson was dialed in during the fourth quarter and made some big plays down the stretch as the Jets stole a win on the road.

It was also the first touchdown catch of Wilson’s career, so there was certainly a cause for him to whip out the now-iconic Griddy celebration. 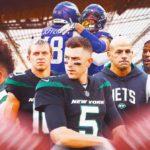 In his season debut, Wilson 50 percent of his pass attempts (18-of-36) for 252 yards, one touchdown, and two interceptions, while also catching a TD on a throw from Braxton Berrios.

Zach Wilson will look to keep these good vibes rolling on into the Jets’ Week 5 clash when they take on the Miami Dolphins back at home, looking to improve to 3-2 on the year.