Knicks keep an eye on Bazemore despite high price

The New York Knicks are reportedly showing heavy interest in ex-Hawks guard Kent Bazemore as the frenzy free agency is starting to get into full swing.

With free agency set to begin this Friday, Knicks president Phil Jackson knows he must upgrade New York’s wing and center position in order to compete this upcoming NBA season.

The 6’5″ shooting guard/small forward has improved his level of play during these past two years for the Atlanta Hawks, averaging 11.6 points and 5.1 rebounds per game, his career best, during the 15-16 season.

Bazemore has gained increased success as of late, defining himself as a modern “3 and D” player. He utilized his unbelievable athleticism and decent jump shooting to gain more minutes during the latter part of his tenure with Atlanta.

For the Knicks, Bazemore’s all-around capabilities provide a perfect fit into any possible rotation, and they will elevate their inadequate defensive rotations from recent seasons. Bazemore also could pair perfectly with newly acquired star point guard Derrick Rose, whose defense has been subpar as of late. Dreaming of a Bazemore-Rose backcourt will definitely tempt Phil Jackson and the New York organization in the coming days.

On the other hand, Jackson understands that he must fill two positions in the upcoming free agency for the recovering Knicks. In addition to the wing defender role, New York continues to search desperately for a starting center in the absence of Robin Lopez following his departure for Chicago in the Derrick Rose blockbuster trade. Jackson faces this tough task with limited cap flexibility as well, having only $29 million free to chase two top-tier free agents.

Kent Bazemore could provide key help on the wing to Anthony and the Knicks (Photo: Kevin C. Cox/Getty Images)

Thus, while Kent Bazemore fits perfectly into what the Phil Jackson’s roster needs, the Under Armour athlete may demand too high of a price for the Knicks to seriously contend for his services. While the wing defender has made it clear that he intends to stay in Atlanta if they agree to pay his high contract demands, the Hawks’ pursuit of marquee free agent Kevin Durant as well as the price of possibly retaining center Al Horford may leave Bazemore looking for a new home.

Bazemore has stayed firm about demanding around $16 million for his services in the upcoming year, more than half of New York’s cap room, and with the wing defender’s talents highly regarded throughout the league, the Knicks will definitely be one of many suitors for his services. In the end, Jackson and his front office may find themselves priced out of Bazemore by another suitor, should the 5-year veteran find pastures anew. 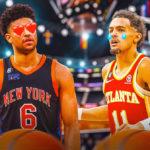 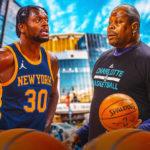 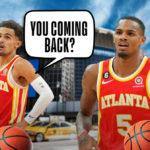 The Knicks also have shown interest in fellow wing free agent Chandler Parsons, but with Parsons publicly declaring his confidence in finding a max deal, New York might end up being priced out of the ex-Mavs sharp shooter as well. Parsons pales in comparison to Bazemore on the defensive end.

Both Parsons and Bazemore have become symbols of the ridiculousness that has become NBA free agency in recent years. With the cap limit increasing an unprecedented $22 million for the upcoming season, mediocre-to-above average free agents are more frequently receiving inflated contracts by desperate teams trying to strengthen their roster, and because of the need to hit the cap floor. Bazemore’s $16 million demanded will show just how good it is to be an NBA free agent right now.