There’s almost nowhere to go but up for the Los Angeles Lakers. After a underwhelming 2021-22 season, LeBron James and co have a lot of work to do – and it looks like they’ve already started. King James recently met with Lakers GM Rob Pelinka and new head coach Darvin Ham.

The initial reports stemming from said meetings focused on LeBron’s potential two-year contract extension just shy of the $100 million mark. But according to Yahoo Sports insider’s Chris Haynes, whole the topic of his contract was “broached” the focus mainly centered on brainstorming over how to prevent doubling down on another disappointing season:

James and his agent Rich Paul — CEO of Klutch Sports — met with Pelinka and head coach Darvin Ham last week. The 37-year-old is approaching his 20th season in the league. He is due for a two-year, $97.1 million extension.

And while contract dialogue was broached, the majority of the hour-long meeting was about expressing concerns, and hearing out strategies and opinions to assure there wouldn’t be a repeat of last season’s epic failure, league sources told Yahoo Sports.

Beyond the Xs and Os, it’s the competitive fire that LeBron James reportedly wants stoked on a consistent basis. Last season’s Lakers squad infamously lacked any cohesion – something James wants to flip the script on with the new coach and supporting cast. He was said to harp on how the team “didn’t give themselves a chance” often enough as the effort waned constantly throughout a season marred riddled with injuries and outside noise.

Ham agreed with James and reiterated that his main objectives are to hold everyone accountable and foster an atmosphere of selflessness, sources said. He voiced that defensive tenacity needs to be picked up all across the roster and also forewarned that players would have to play new roles and if he sensed reluctance, he wouldn’t hesitate to remove them from the game, sources said.

Ham has said all the right things thus far, reiterating that he’ll be able to “hold everyone accountable” and won’t operate under the same restrictions as Frank Vogel did last season. But of course, until these meetings translate to wins, it’s all lip service at this point. 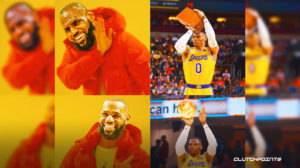