Fox Sports television personality Skip Bayless has become a prominent figure in the sports media over the last decade or so. He made a name for himself by being the most vocal critic of LeBron James throughout his pro career. Recently, he took aim at his son, Bronny. Bronny James currently plays high school basketball at Sierra Canyon School in Los Angeles.

After a video was released where Bronny drove and threw down a jam, Bayless took to Twitter saying “Your dad wouldv’e dunked it left-handed.” That sent social media ablaze with fans blasting Bayless for his criticism of the 17-year-old James. But they weren’t alone.

On Tuesday, ESPN’s Jalen Rose took a shot at Bayless as well.

Jalen Rose would like to remind you Skip Bayless averaged 1.4 points in high schoolpic.twitter.com/mAmLmcgAEX

“Nobody should be overcritical of high school players, in particular those of professional athletes. Especially if you were a junior in high school and only averaged 1.4 points. I’m just saying,” Rose said as rest of the ESPN cast laughed hysterically.

Rose did not have to spell it out. Skip Bayless’ high school basketball career is well known and documented. 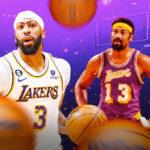 Bayless of course used to work for ESPN for many years. He and Stephen A. Smith were the original duo of the show “First Take.” However, in 2016, Bayless spurned his former company and took his opinions to Fox Sports to co-host “Undisputed” with legendary Hall of Fame football player Shannon Sharpe.

Bronny James just began his senior year of high school. Reportedly Oregon was recently added to the list of potential schools for him next year.