Kevin Durant will become a free agent this summer, and with the Thunder having just traded away Serge Ibaka, there’s no certainty that Durant will be staying in Oklahoma City.

With this in mind, everyone around the NBA world is doing what they can to try and convince KD to jump ship and come to their team. This includes Lil B, who has supposedly cursed Kevin Durant after the former MVP called him “wack.”

Now Lil B is trying to recruit Durant to the Knicks in exchange for lifting the curse.

Unfortunately for Lil B, hearing voices in your head isn’t usually taken as a sign of holiness as much as a serious mental disorder that he should probably get checked out. 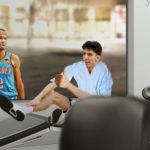 While the Knicks have certainly become a more enticing option with the trade for Derrick Rose, it’s hard to see Durant leaving a team that almost won the Western Conference Finals for a team that hasn’t made the playoffs in three years. Especially given the fact that he has already stated that he wants to be on a team that can win now and has expressed interest in the Warriors.

Looks like Lil B and “”The Based God” will have to have a serious discussion about their recruitment process.