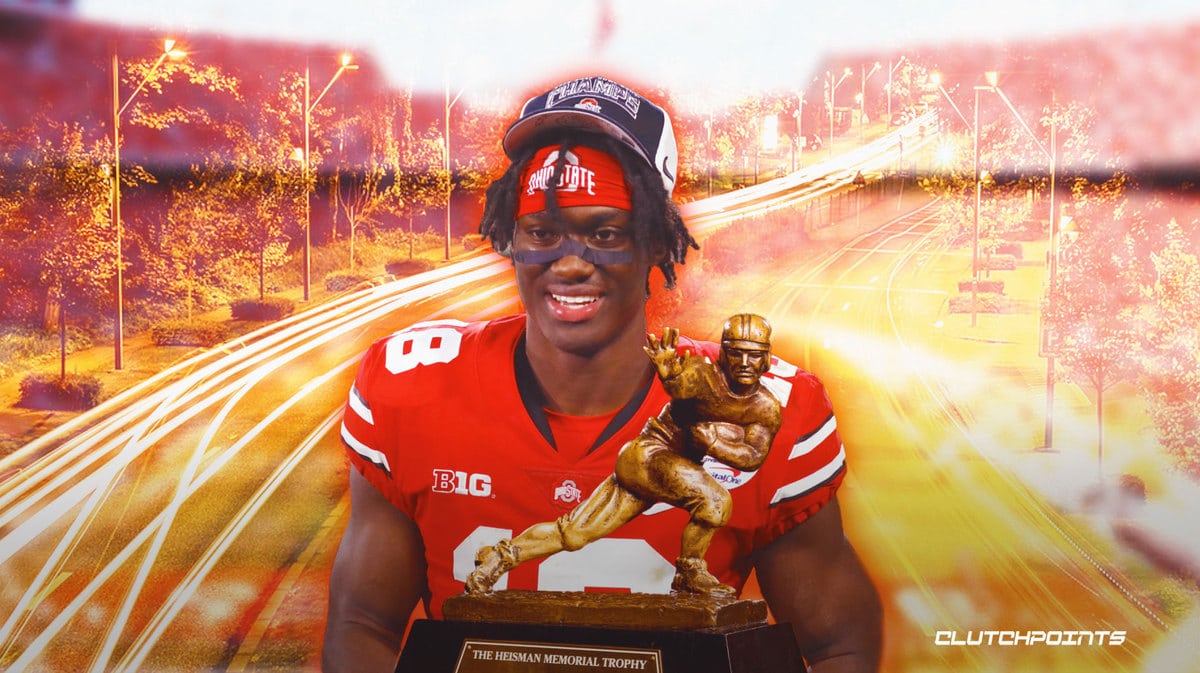 Very few teams remain undefeated following Week 3, and one of those teams is No. 3 Ohio State. The Buckeyes are coming off another dominant win, defeating Toledo 77-21 on Saturday. Following three victories to open the season, some names are starting to gain national attention.

One of those standout studs is wide receiver Marvin Harrison Jr. When Jaxon Smith-Njigba went down with an injury on Week 1 against then-No. 5 Notre Dame, fans were wondering who would step up. Luckily for them, it did not take long for Harrison to appear.

Even with Smith-Njigba back, Harrison seems to be the new No. 1 option in the Buckeyes’ passing game. The young wideout is now receiving some Heisman Trophy buzz, but is he really a contender?

With that being said, here are three reasons Marvin Harrison Jr. is a real Heisman candidate in 2022.

3. He is not afraid of big moments

The first time Buckeyes fans saw the potential Marvin Harrison Jr. had was at the 2022 Rose Bowl. After a quiet freshman year, the wide receiver capped off his first year with Ohio State in the best way possible.

Prior to the Rose Bowl against the Utah Utes, Harrison had appeared in 12 games. He registered just five receptions for 68 yards and no touchdowns. Then, he went off on the first day of 2022. Harrison had six catches for 71 yards and three touchdowns, including one in the fourth quarter to tie the game.

MHJ vs Utah in the Rose Bowl

Although the game versus the Utes was technically part of the 2021 season, the greatness Harrison displayed cannot be ignored. He showed he is not afraid of big moments and, with him on the field, Ohio State can be a College Football Playoff contender for the next couple of seasons.

If he did all that as a true freshman, Harrison will likely get much better as the 2022 season progresses. Fans should expect him to be one of the most important Buckeyes in 2022 and 2023, and continue to make highlight-reel plays as conference matchups enter the fray.

2. He has Hall of Fame pedigree

Marvin Harrison Jr.’s name might sound familiar when fans hear his name on television broadcasts. Well, that’s because his father is Marvin Harrison Sr., a Pro Football Hall of Fame member who played 13 seasons in the NFL, all with the Indianapolis Colts, serving as Peyton Manning’s most reliable receiving option throughout his career.

Harrison Sr. has a Super Bowl ring and is an eight-time Pro Bowler. He was also named to the All-Pro teams eight times, with three of those being first-team selections. He accumulated over 1,000 receptions in his career for a total of 14,580 yards and 128 touchdowns. Harrison Sr. also held the most receptions in a season record with 143 for more than a decade, a feat that was snapped by Michael Thomas in 2019.

Additionally, the Buckeye probably learned a lot from his father and might have received some important advice throughout his young career. If that is the case, he has a higher ceiling than people might think. Perhaps the 2022 season is his big breakout season, yet he is far from his final form.

1. His stats are absurd

At the end of the day, a player must perform really well to be considered for the Heisman Trophy. Marvin Harrison Jr. is doing just that in 2022.

He opened the season with a relatively quiet performance against Notre Dame. He had just five catches for 56 yards. However, he followed Week 1 with two stellar games that put him in Heisman conversations.

Versus Arkansas State, Harrison had seven receptions for 184 yards and three touchdowns. He averaged an impressive 26.3 yards per catch. His display against the Red Wolves was enough to earn him Big Ten co-Offensive Player of the Week honors.

Then, in Week 3, Harrison had another 100-yard game. He caught six passes for 102 yards and scored twice against Toledo. Notably, he did that in Smith-Njigba’s first game after he returned from his injury. Smith-Njigba only had two receptions for 33 yards. Even with the All-American back, Harrison still maintained his role in the team’s offense. If the game was not such a blowout, perhaps Harrison could have had even more impressive numbers.

The young wideout’s numbers deserve national recognition. What Harrison is producing is Heisman-worthy and fans should pay more attention to what he will do next. With the Buckeyes set to face Wisconsin, Michigan State, and Michigan this season, Harrison will have the chance to show he is indeed a Heisman contender when the games get more important.