James Harden of the Houston Rockets grew up in Los Angeles, and of course has several ties to the city even after being drafted by the Oklahoma City Thunder and then later traded to the Rockets.

On Sunday, he decided he would give back to his community by holding a block party at Audobon Middle School, where he attended as a young boy. Although he has now been an NBA player for several years, he felt now was a good time to start giving back to his community,  per Tania Ganguli of the Los Angeles Times.

“Just basketball-wise. Business standpoint. Family. Just I’m in a really, really good place in my life right now,” said Harden, who added that his 2017-18 season with the Houston Rockets was the most fun he’d ever had. “Once I make sure myself is great, then I can make sure to help others out. Perfect timing.”

Hardened partnered with Adidas for the event. 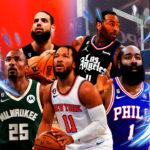 Ten years seems like a long time for a player finally start giving back to the community they came from. There are perhaps people who will criticize Harden for not doing it sooner. But his explanation makes complete sense. Per Ganguli:

“I thought it was time,” Harden told The Times. “Ten years into my career. I’m more comfortable than I ever been. Just looking back throughout the season, how can I impact and put a touch on the kids lives. That’s something that I think about every day. This is the first stop.”