The college football coaches preseason poll dropped on Monday, with few surprises at the top. For the second straight year, Alabama Crimson Tide head coach Nick Saban’s peers were buying what he was selling, as the Tide garnered the most no. 1 votes. Fellow top schools, such as Ohio State, Georgia and Clemson, rounded out the top-10. But there was one huge surprise in the preseason poll. Not only did Texas football place inside the top-20, but they also received a no. 1 vote! Twitter lost its mind.

College football fans waking up today seeing that Texas (5-7 in 2021) received a 1st place vote in the preseason poll pic.twitter.com/9WQHodVC25

The initial reaction of college football fans to the Longhorns no. 1 vote in the preseason poll was one of shock, not unlike the reaction of Starlord in this scene from Guardians of the Galaxy Vol. 2.

Texas wasn't just ranked No. 18 in the preseason Coaches Poll, but they also received a first-place vote.@slmandel couldn't believe what he saw.https://t.co/7PuWKcx60Q pic.twitter.com/N2oiRNyivk

Dumbfounded was also a good way to describe the reaction some had to a coach thinking Texas football could be the no. 1 team in the nation in 2022. Why is that such an egregious vote in the first place, you ask? This Twitter user described it pretty well.

Texas went 5-7 the year before, come in with a QB battle between 2 guys who have a combined 86 pass attempts (all of them being from one QB) and is considered a preseason top 20 team by the coaches poll. Never change, college football, never change.

That sums it up. The Longhorns, who went 5-7 last year and haven’t been to the title game since 2009, do indeed have a quarterback battle between Hudson Card- he of the 86 career pass attempts- and Ohio State transfer Quinn Ewers, whose college football career has consisted of a few handoffs.

It’s easy to see why some fans were more than a little skeptical of the college football preseason poll after seeing Texas get a no. 1 vote. Some were even thinking conspiracy.

One college football coach gave the ultimate “Texas is back” endorsement in the preseason poll.

The coach? My guess is UTSA’s Jeff Traylor.

Of note — Texas earned a *first place vote* in the preseason Coaches Poll.

Sark doesn't have a vote. Could be ex-Texas RBs coach Stan Drayton over at Temple? Maybe Nick Saban is playing head games? Maybe someone meant to vote Texas-San Antonio No. 1? https://t.co/MJUA5V2nPn

One fan floated the possibility of Alabama’s Nick Saban expertly trolling Texas by voting for them, then watching as they fail to live up to the expectations. Another mused about a coach potentially attempting to vote for Texas-San Antonio.

Either way, it’s clear that fans refused to accept that someone possibly thought Texas football could be good enough to be the no. 1 team in the nation. 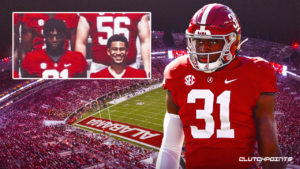