In the East, Cleveland remains the only contender for titles

Eras come and go. The style of basketball can change, but in the NBA, there’s a timeless formula to winning an NBA championship.  No matter the team, no matter how good their regular season record is, if they don’t fit this mold, I tend to not believe the hype.

When Atlanta won 60 games in 2014-2015 without a true star, I refused to believe that they were a true challenger to Cleveland.  And when Atlanta got swept in the Eastern Conference Finals, I was the least bit surprised.  The Eastern Conference is Cleveland’s to lose.  As a matter of fact the First Seed, something that Cleveland doesn’t even seem to prioritize anymore, might just be Cleveland’s to lose as well.  Maybe my Cavalier fandom is showing, perhaps it even makes me incredibly biased, but when I look at the Boston Celtics new team after this off-season, I still see Cleveland as the clear favorite.

Let’s start by establishing what the formula for winning a Larry O’Brien Trophy is.  Before even starting, any team that wants to win a championship needs what Ben Golliver refers to as a “tier one superstar”.  How many of these tier one superstars exist in the NBA at any given time varies, but at the current moment there are six: Westbrook, Curry, Durant, LeBron, Kawai, Harden.  These are players that are established franchise players, perennial MVP candidates and constant NBA first team members.  There are guys in the NBA that may become a tier one player (Karl Anthony-Towns, Giannis Antetokounmpo, and Anthony Davis all jump to mind), but adding them to the formula in substitute may not produce due to the nature of their game (KAT has issues on the defensive end as most rookies do, Giannis doesn’t have a suitable three point stroke, Davis is close but lacks a defined role as either Power Forward or Center and doesn’t have a truly defined game).  92% (56/61) NBA champions had an All-NBA First Team member since the award was invented.  For most of those teams, it was not that player’s first appearance on the list.  But say you didn’t luck into an incredibly uneven trade (lookin’ at you Houston), poached your rival’s best player (Hi Golden State), or luck out and have the best player in NBA history born within an hour of your franchise (Thanks LeBron), maybe we should just try and skip to step two until your European draft and stash becomes undisputed number 1.

The San Antonio Spurs have a saying: Defense wins championships.  Look at their success over the past 15 years and tell me I’m wrong.  San Antonio has won five championships in 18 years, and what do you know, they fit the model perfectly.  They’ve had three tier-one players throughout this run (David Robinson, Tim Duncan, Kawhi Leonard) so that checks the first box, but equally importantly they’ve built their entire game around the second requirement of a championship, premier defense.  Since the creation of the “All-Defensive Team” Honor in 1968, 85% (40/47) of champions had a team member selected for First Team All Defense within the past three year.  Since 2006, only three champions didn’t have an active First Team member yet they did have a premier positional defender.  Tristan Thompson, for example, did not make either All-Defensive Team yet is universally accepted as a premier switch defender and against small ball line-ups is a ruthless rebounder.

Having such a rebounder can help make up for a team’s lack of defensive superstar.  As Dennis Gallagher of 82Games.com found, having top scorers and rebounders on a team correlates with success.  Assists, Steals, Blocks and other traditional defensive stats correlate less with championships.  In a league where the D’Antoni revolution has teams doubling down on offense and ignoring the defensive game, an elite rebounder might just suffice for a true defensive stud.  Yet a team can find a defensive stud, a top five player and still be a mess.  Look at the 2007 Cleveland Cavaliers, Larry Hughes was 1st Team All Defense, Eric Snow was second team just three years prior and LeBron James was just coming into his prime.  Depth beyond the 8th-9th man on the roster for a championship contender isn’t particularly important, but filling out a complimentary supporting cast might be equally important to adding a defensive stud.

[Guard, Wing, Big].  If you were to create a matrix of what the starting five and closing five of any championship team would look like, almost universally the lineup would follow that dynamic.  Building a “Big Three”?  One of those three positions will be a top tier player, and the other two third tier elite players.  This is the team Andrew Sharp of Sports Illustrated (September 8th, start at 28:00) suggests Boston is building, stating that, “…neither Hayward nor Kyrie are top 15 guys ever, but they provide a stable enough foundation that Boston has a real shot [at Anthony Davis].”  Even in an era of small ball and fast paced movement, the Guard Wing Big formula holds true.  Looking at the past five NBA champions, each fell nicely into the mold.  [Wade, James, Bosh], [Ginobili, Leonard, Duncan], [Irving, James, Love], [Steph, Durant, Green], even the ultimate small ball line-up of Steph, Klay, Draymond which featured no player taller than 6’8 still followed an adapted model with Draymond serving as a physical center that could keep up with wings.  Finding a support cast for your top five player involves slotting multi-versatile players into the non-top five player slot.  Your top five player is a wing?  Find a lockdown defender of a guard and a stretch four.  You’ve got a Defensive Player of the Year Candidate Big as your top five?  Why not find a pass first point guard and a jack of all trades wing (Hayward and a Healthy Parsons come to mind) to slot the other two spots.  By pulling tier three guys to fit around your big five, there is less of an issue regarding trade compensation and more likely that they can work as complimentary specialists.  Which finally leads us to the last part of building a team: auxiliary pieces.

You’ve got two or three all-star caliber players on the floor, but three doesn’t make a team.  When filling out a roster, specialists that can thrive in a low economy environment tend to provide the most utility.  Specialists, in this sense, are players who perform below average at most parts of the game but provide one aspect at an All-NBA level.  Three point shooting is a common place where specialists show, with the ability to hide them on defense and put them in a corner on offense waiting to catch and release with incredible accuracy.  The Celtics and Heat both ran Ray Allen as a three point specialist, Cleveland did a similar thing with J.R. Smith as did Manu Ginobili for the Spurs. 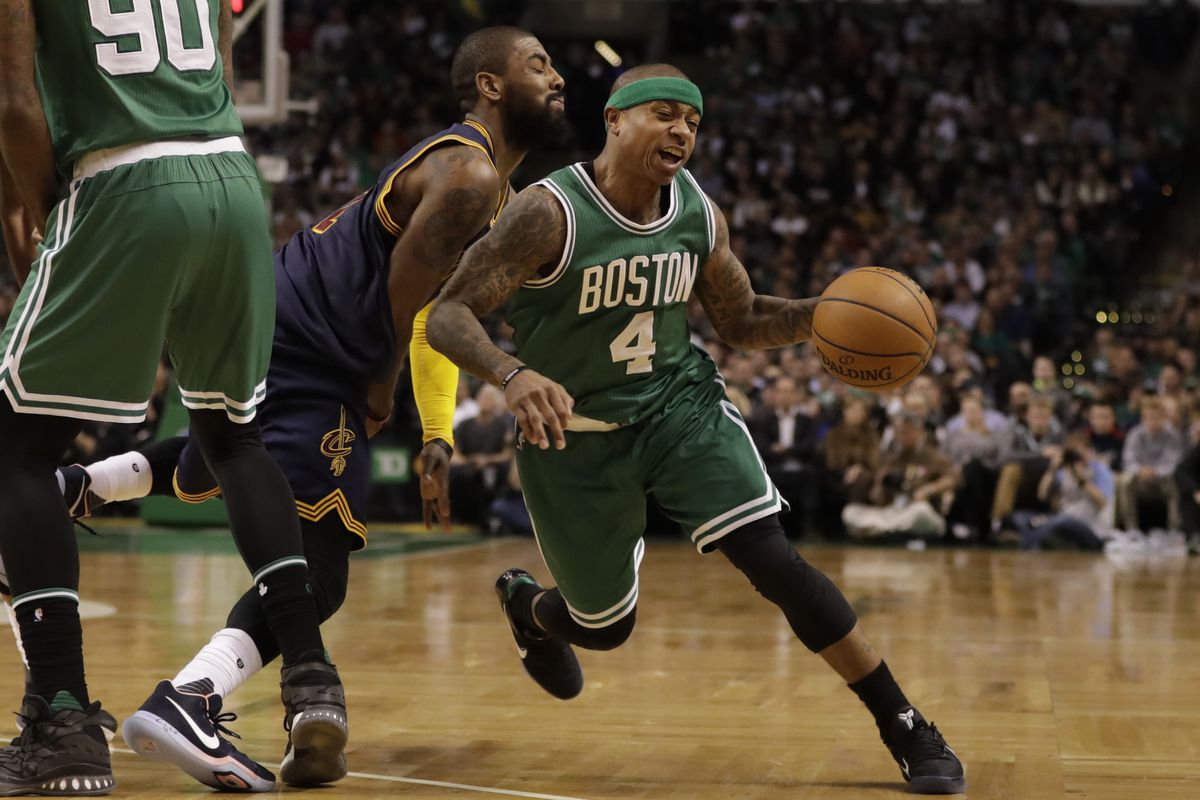 Rebounding is another place where specialists exist, in the modern NBA almost every contender has some form of elite rebounder.  Houston runs Clint Capella, Cleveland with Tristan Thompson, Oklahoma City has Steven Adams, LA has DeAndre Jordan, Memphis plays Marc Gasol, the list goes on.  A team is filled out with a set of backups, an off the bench gunner, a defensive specialist, until you end up filling out the roster with culture veterans and young projects.  The further you get from the starting line-up, the less the makeup matters.

Here we find the Boston Celtics, a team that fails to meet the criteria above, yet is still a good team.  [Irving, Hayward, Horford] is an interesting setup.  Horford is an underrated defender yes, but he’s no top 10 defensive player.  Boston had a tandem of wing defenders in Avery Bradly and Jae Crowder previously, but traded them for Marcus Morris and cap space.  Irving is a stellar scorer, but his creation ability is stifled by occasionally selfish play.  Hayward was a perfect fit in the Stevens system, but both he and Irving are second options.  What we then have is a team that doesn’t have a top tier player, doesn’t have an all-defensive player, failed to address their weakness in rebounding (Baynes can’t play more that 10-15 minutes a game, and Amir Johnson plays for the Sixers now) which in this era is arguably more important than defense, and traded most of their specialists away.  Their depth chart fails to inspire confidence with a sophomore starting shooting guard and rookie 6th man don’t inspire confidence regarding a team’s depth.  Looking from an objective standpoint at the formula and stats, Boston simply isn’t a championship contender.

Don’t get my nit-picking confused for dismissal.  Boston has three All-Stars on their team in Irving, Horford and Hayward.  They have two rookies in the rotation with a sophomore, but these were two top three picks and an outstanding summer league player.  Rozier and Smart are both quality backups who can run the second unit.  This season Boston will be a good team, however, just good teams don’t win championships.

*Stats unless noted from basketball reference.com