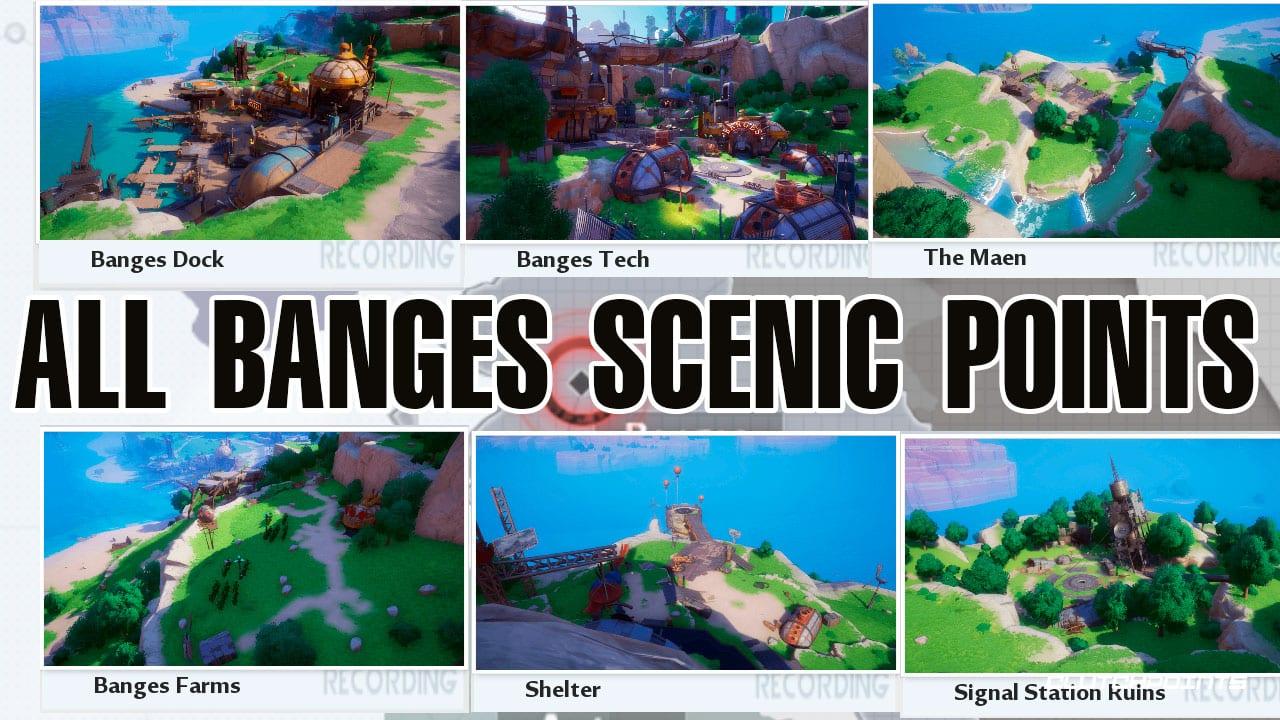 Tower of Fantasy, the open-world MMORPG has finally launched, and part of its exploration mechanics are the Scenic Points. These are specific spots in each region that showcase the landmarks in that region, and rewards you handsomely for the meager task of simply going to the spot and clicking a button. Each will reward you 20 Dark Crystals and 20 Banges Exploration Points, for a total of 120 of each.

It’s also a nice way to appreciate the region and its unique landscape. Banges has an interesting landscape of neon lights, slightly reminiscent of a post-apocalyptic cyberpunk aesthetic.

If you’re playing on a PC, the unlimited wall climbing exploit will certainly come in handy, but is not necessary. This guide also assumes you’ve unlocked all Spacerifts and unlocked the Omnium Tower in the region.

Here are all of the Scenic Point locations in Banges.

“A bustling dock. It’s a place for goods to come in and out. It’s the most significant market on Aida and an international transportation hub.” 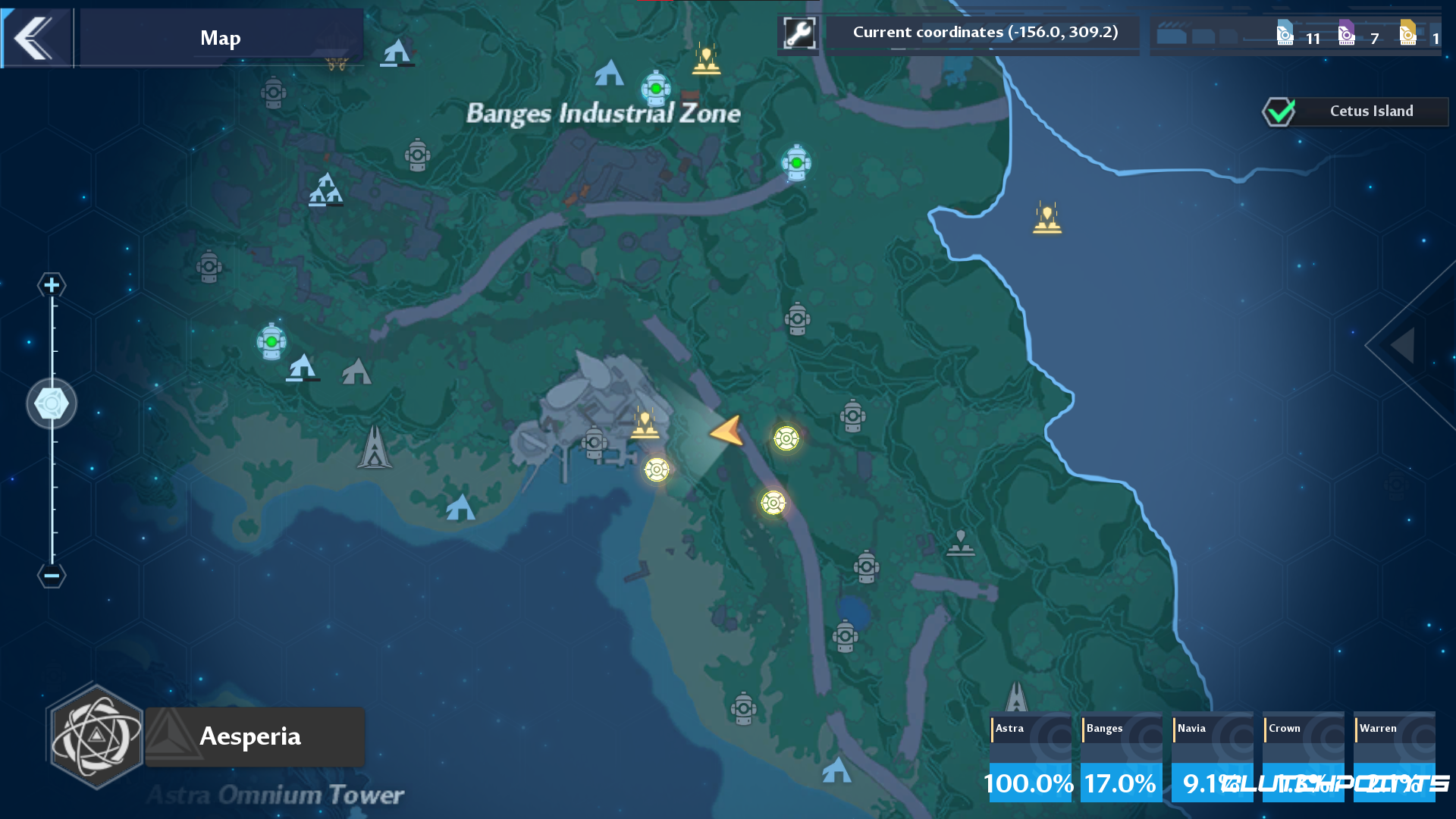 Head to the Banges Dock spacerift and use your jetpack to head up and east. If you’re lucky, there will be a drone waiting for you which you can take up to the bridge. If the drone isn’t there, there’s an easily scalable wall that a piece of the bridge is leaning on, which you can climb then jump down from.

The Scenic Point itself is located on the corner of one of the parts of the broken bridge. 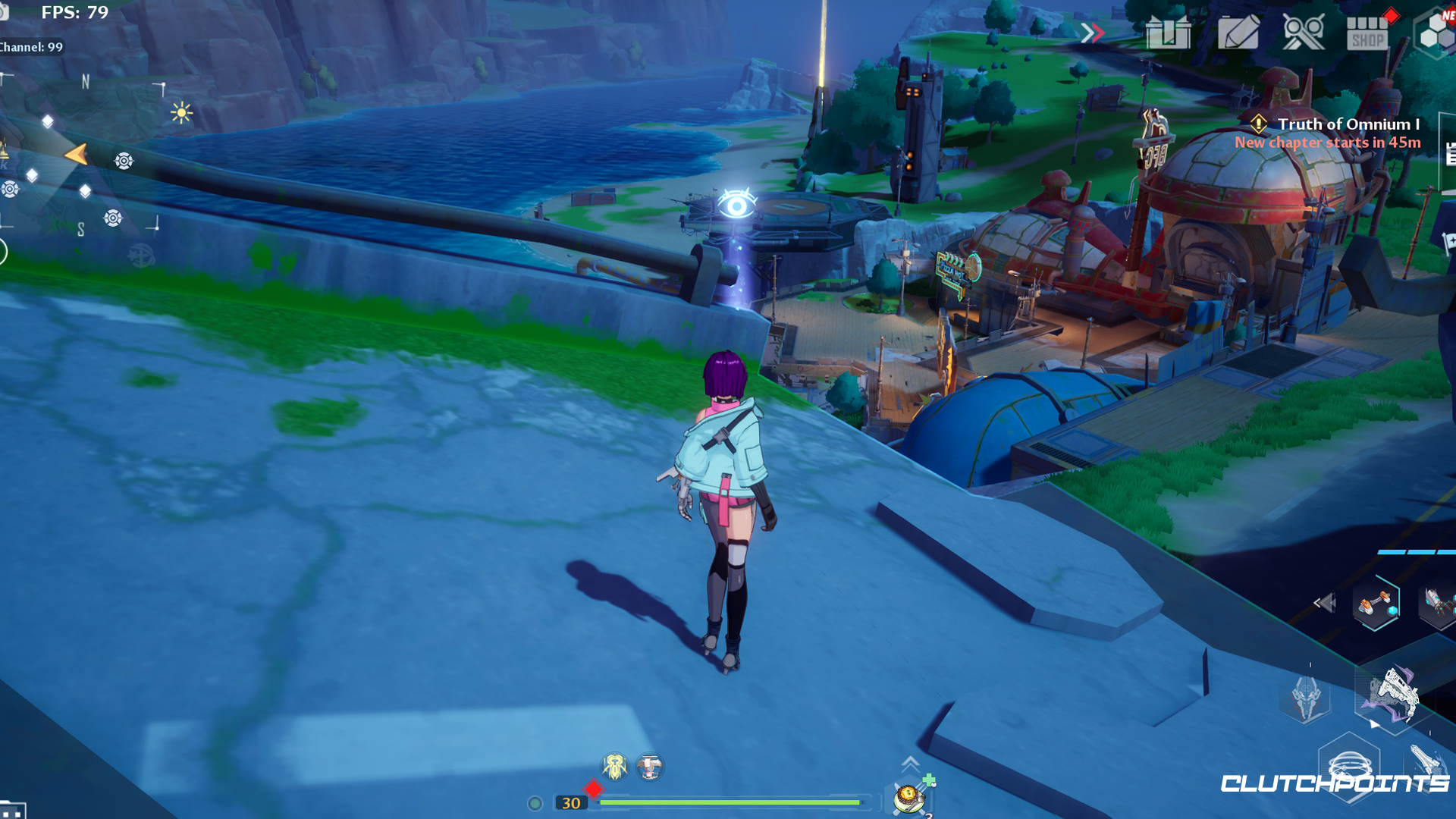 “Serving as the core industry in the Banges region, Banges Industries is in charge of manufacturing machine parts and large-scale equipment. Although it has provided jobs for 80% of the Banges population, it is also the source of the heavy pollution in the area.” 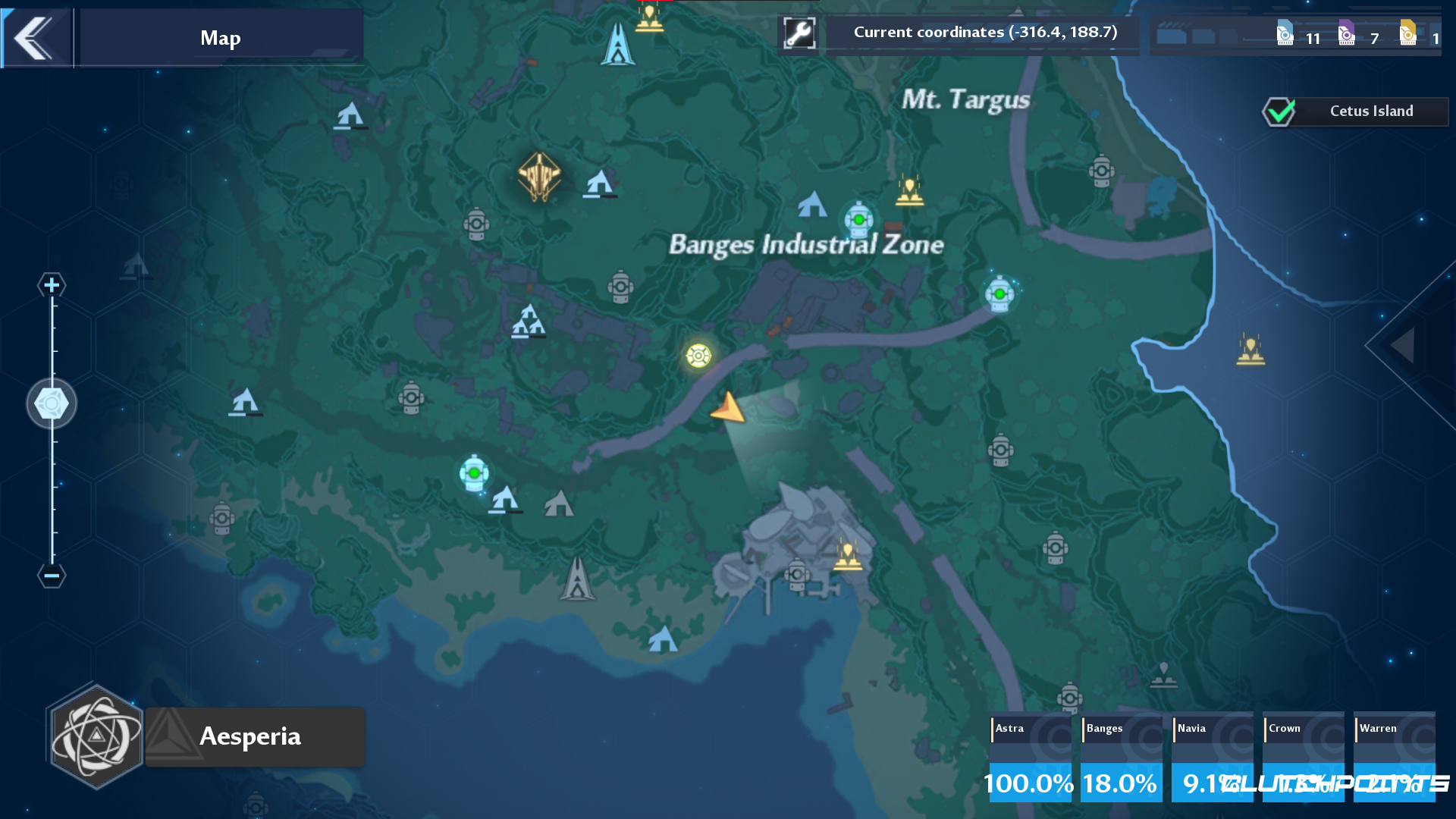 The Scenic Point itself is on a wooden platform sticking out of this wall. 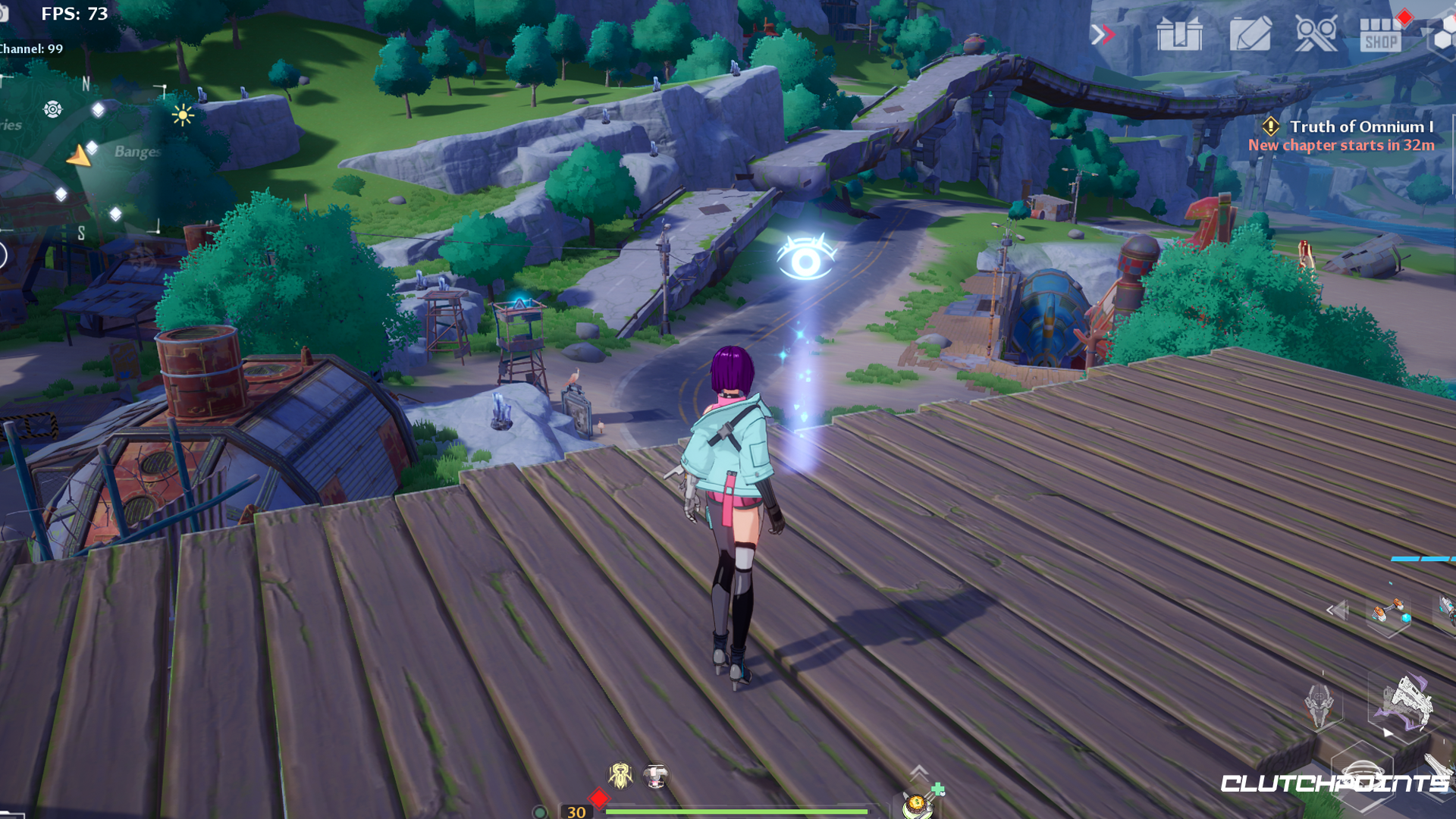 “A branch of inland underground river streaming from the high mountain. It is a man-made river that flows into the sea.” 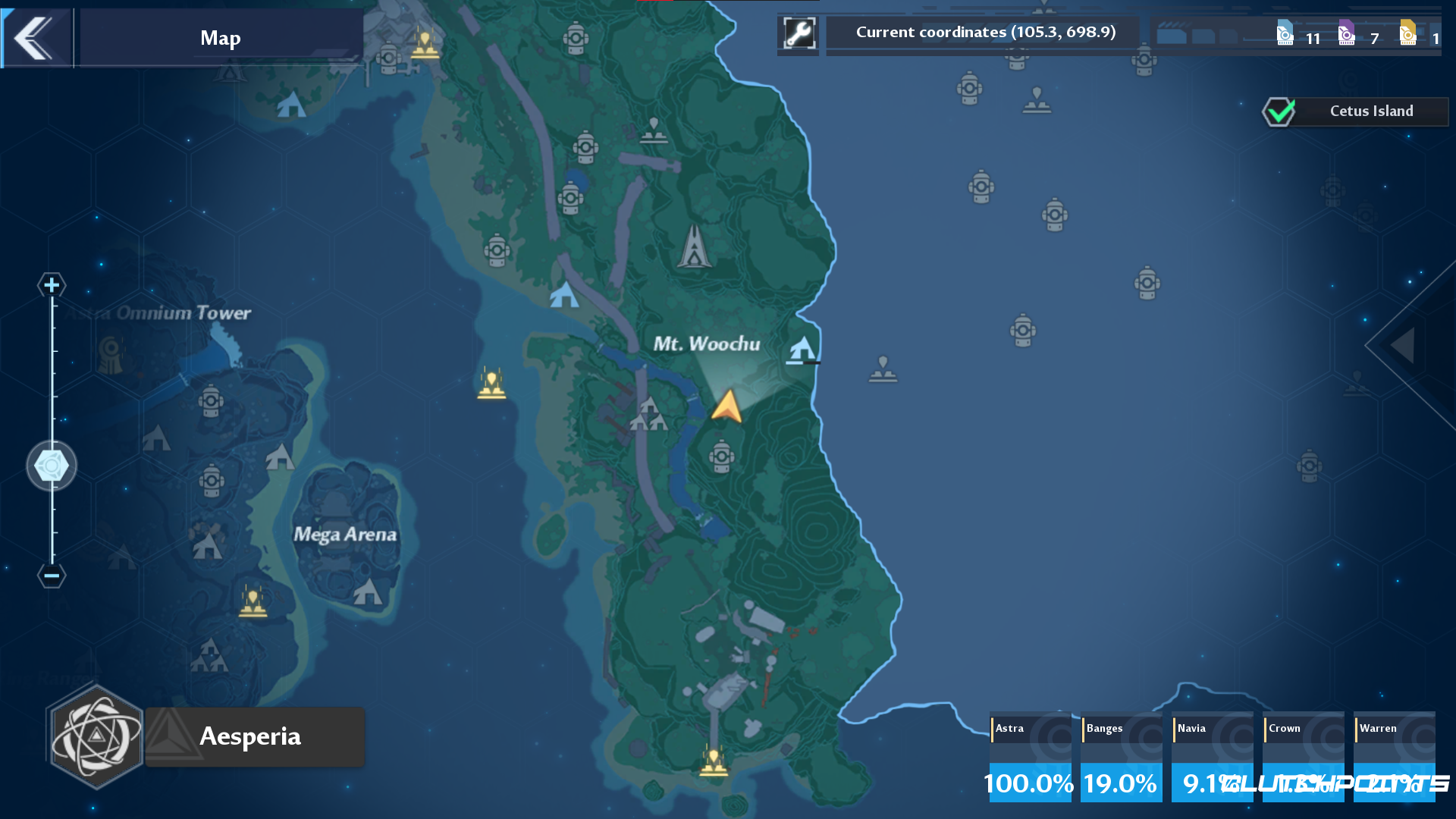 Teleport to the Mt. Woochu Spacerift, cross the river and beeline it east, jetpacking or scaling any wall you encounter, and you should be able to see The Maen Scenic Point. Similarly, you can approach from the Souther Mountains Spacerift if you have it unlocked, then heading west.

The Scenic Point is difficult to miss, as it’s sitting right beside a Thrust Module Co-Operative Challenge that practically acts as a beacon, and with Ruin B-03 in the distance. 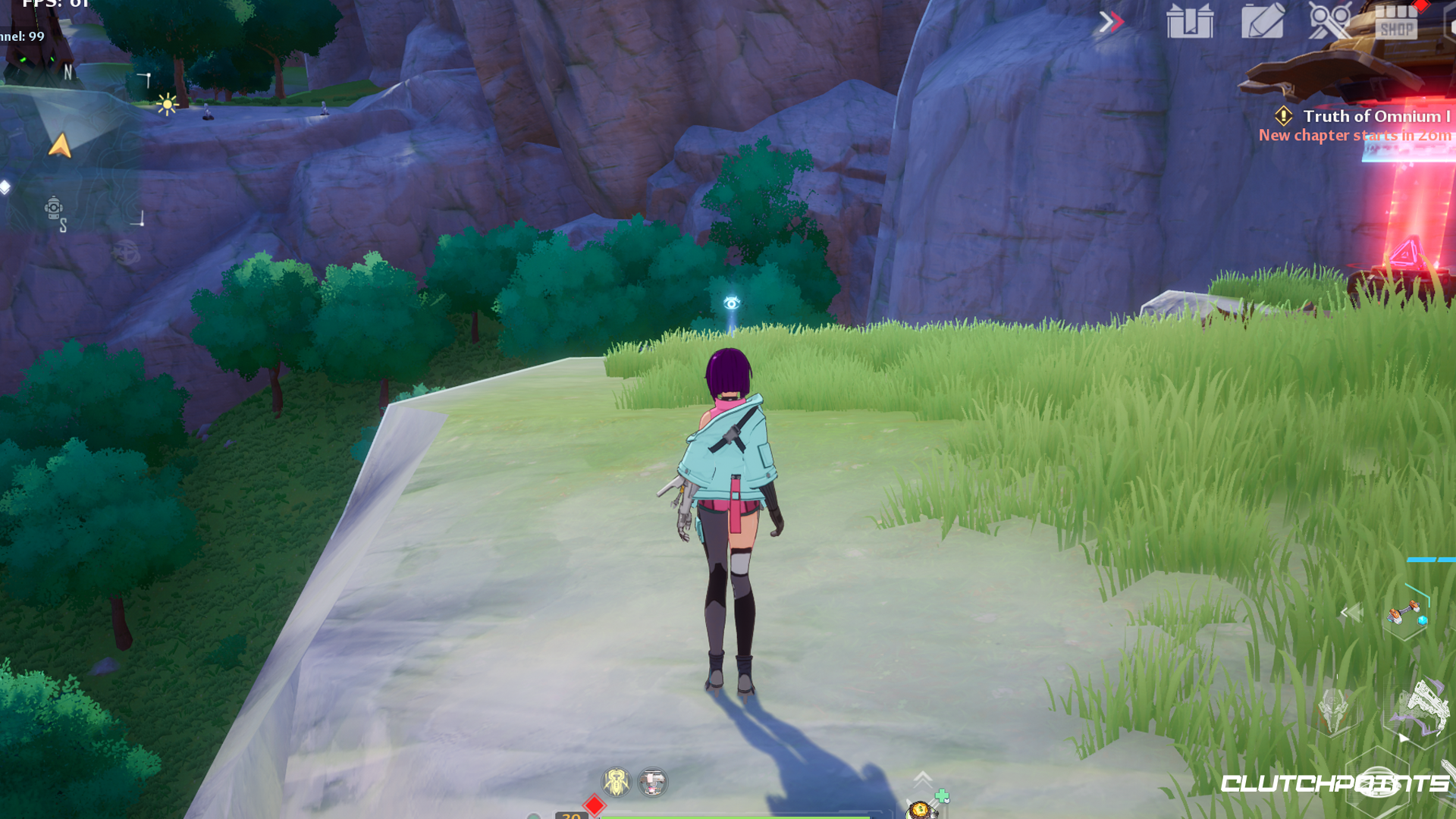 “Thanks to the diligent farmers who continuously enriched the soil with fresh water and potions, the field was made into nutrient soil suitable for planting.” 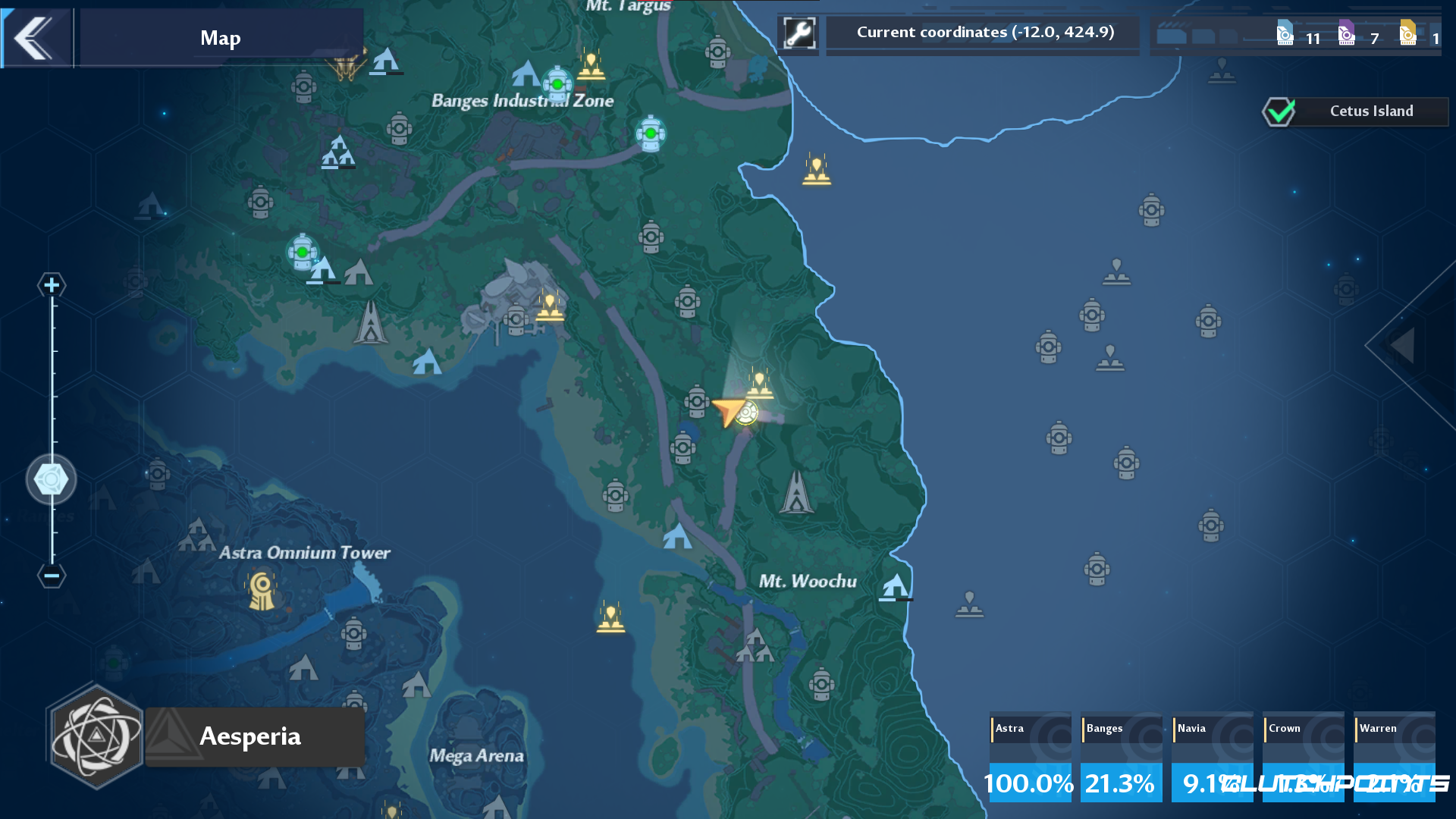 Teleport to the Banges Farms Spacerift and jetpack or simply climb up the bridge. It’s easily visible from the Spacerift and is impossible to miss. Here it is facing the spacerift: 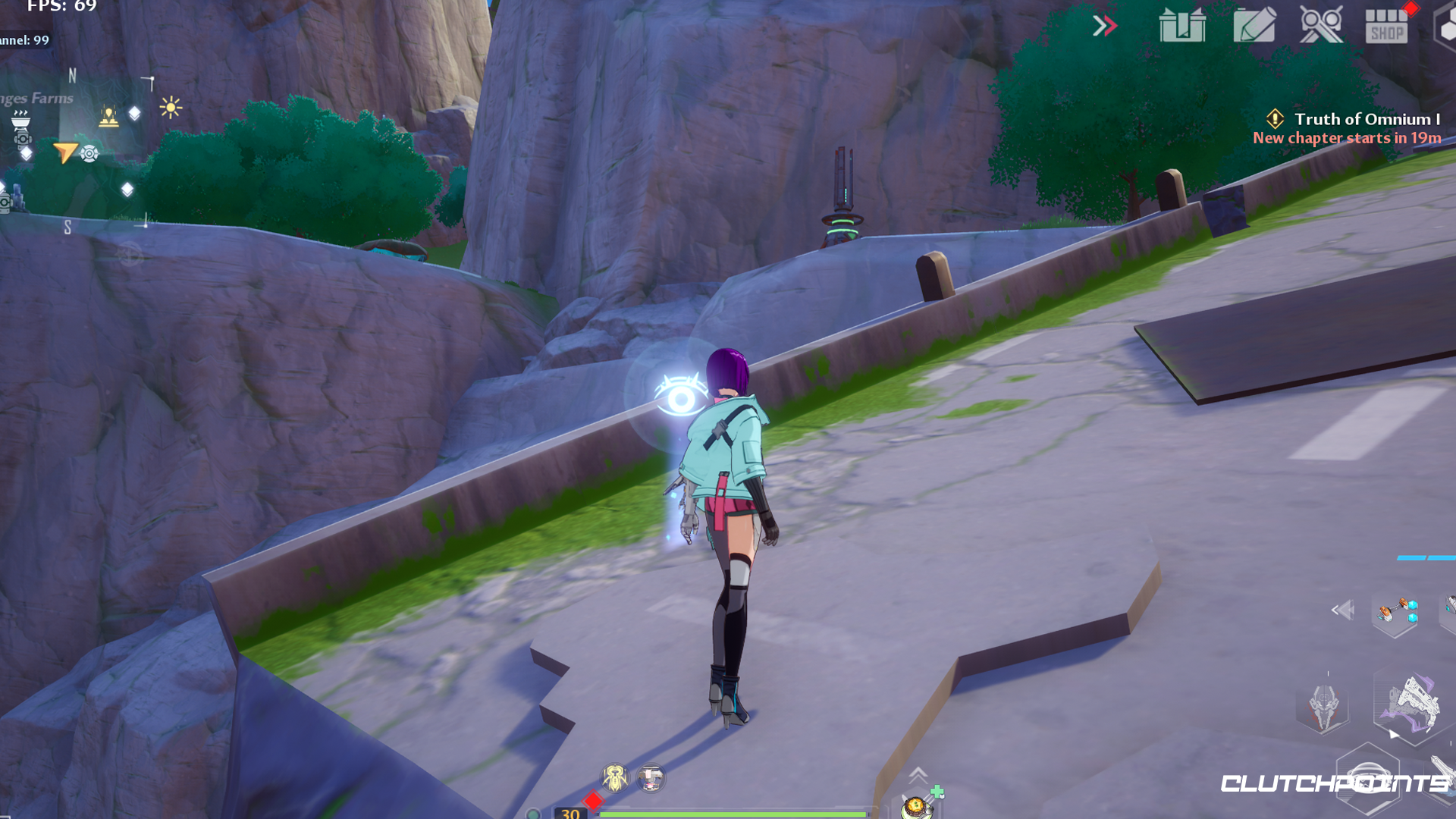 “A shelter built on the edge of the mountain, which holds some machinery techniques. Located in a remote area, the shelter doesn’t have many resources.” 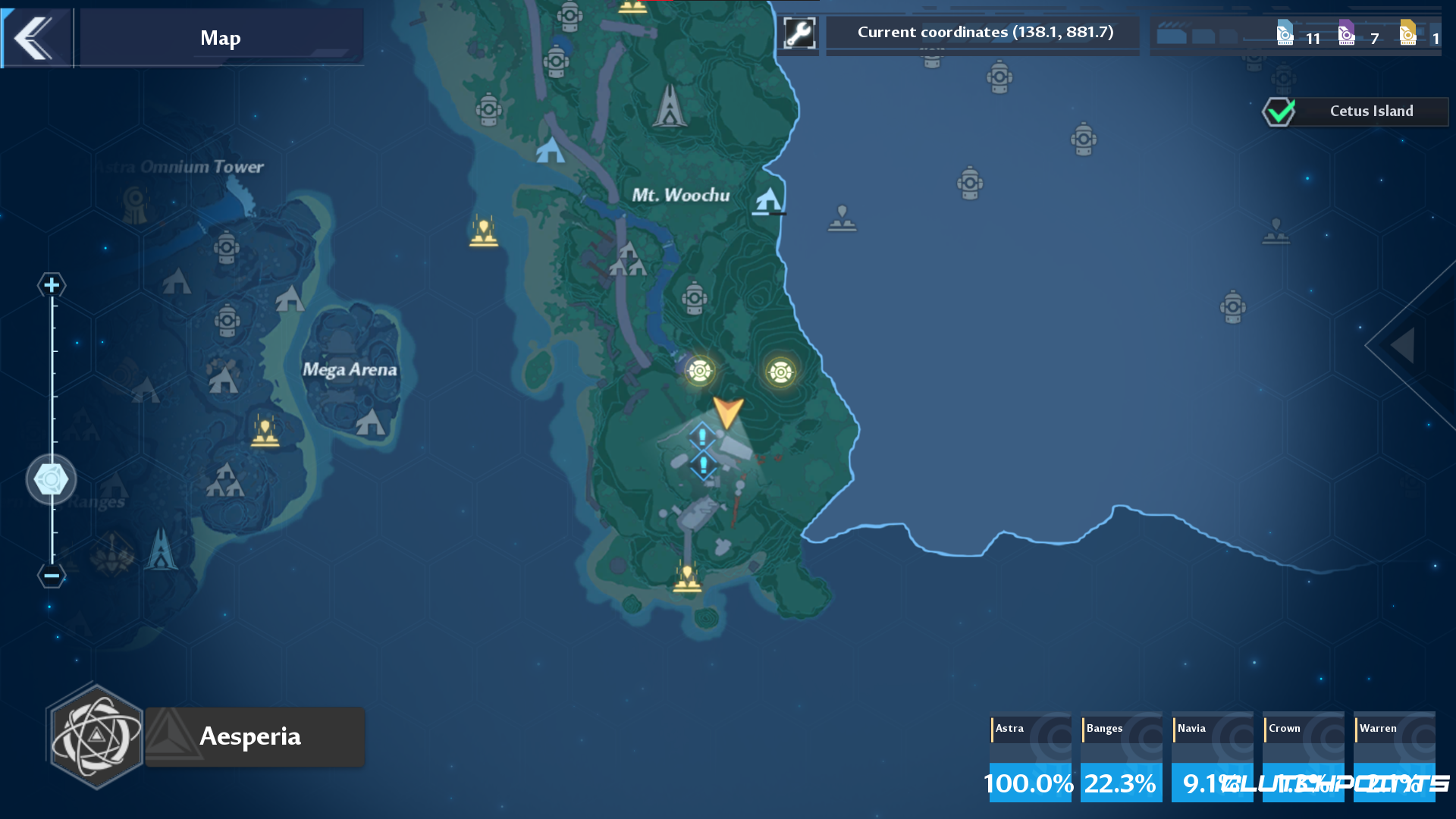 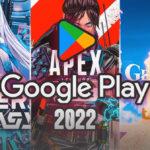 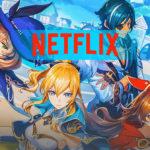 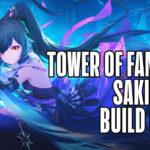 Use the Banges Shelter Spacerift and head north, climbing the wall behind the massive half-dome shaped structure. The scenic point is located near two Crystal ores, and overlooks the entire HT201 Shelter. Here it is, looking in the direction of where the Spacerift would be (if it was loaded in). 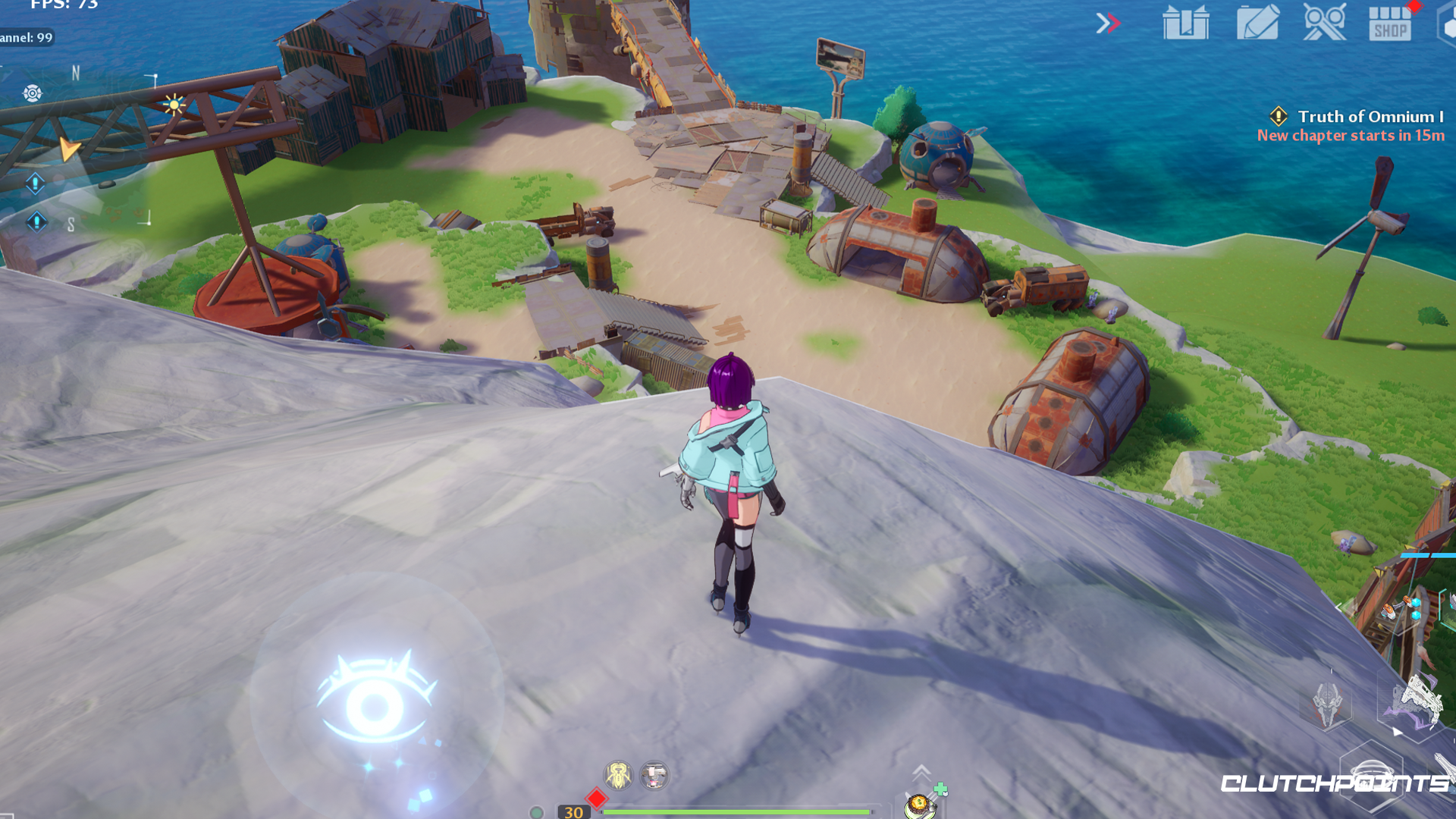 “It used to be the biggest signal transmission base in Banges. Situated among mountains, the base was ruined after the Omnium Shock. However, some people favor these ruins over other places.” 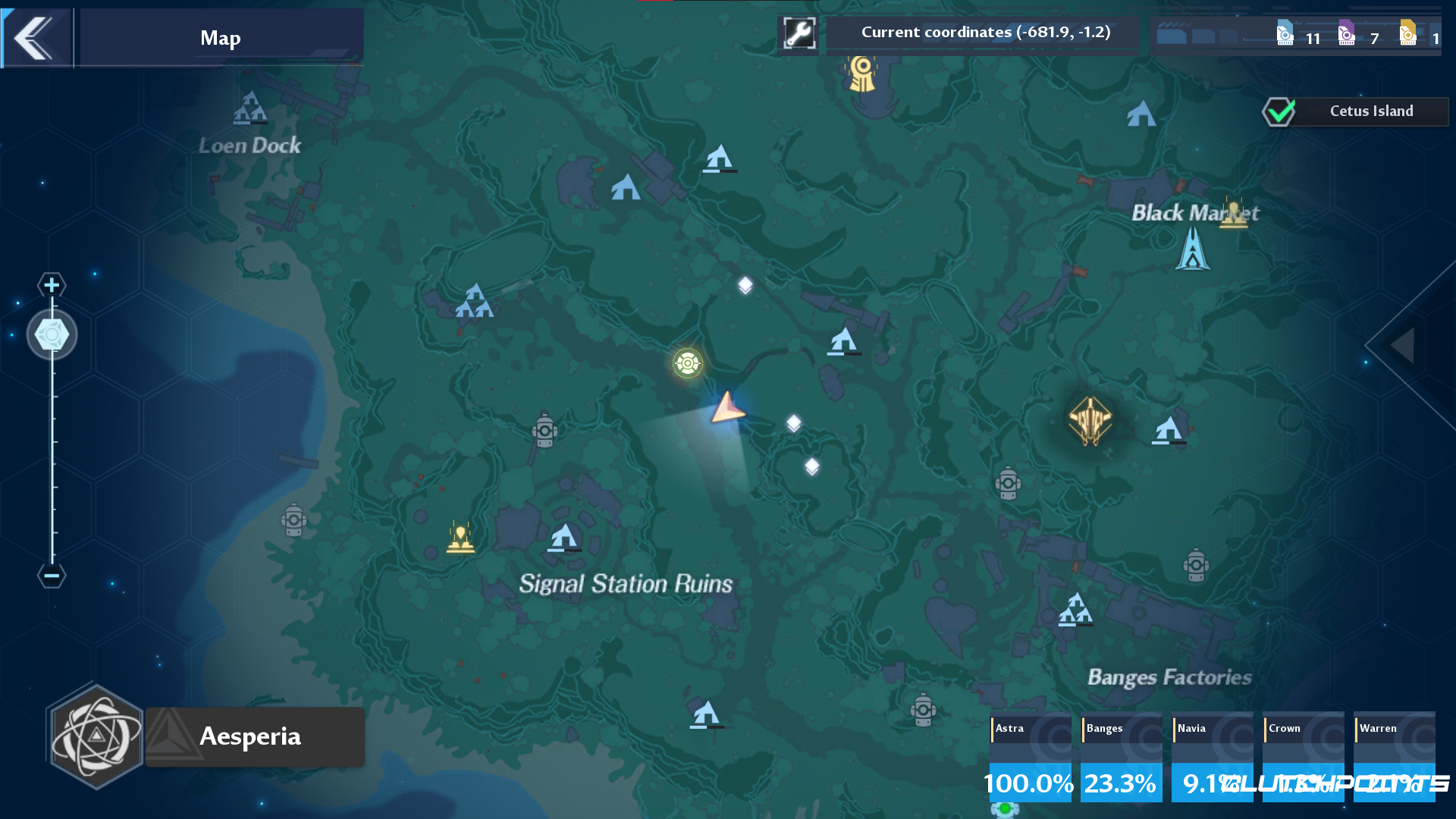 Teleport to the Signal Station Ruins Spacerift. Then, head left around the huge cylindrical wreck and cross the gap towards the fallen tower. Continue moving east until you see the road, then climb the wall on the other side of said road. Skirt around the edge of the cliff until you find the Scenic Point.

It’s also close to a Small Stronghold, so you might find yourself in a little bit of a skirmish with some Aldan Zealots and Londor the Sentinel before getting a momentary peace to appreciate the view. 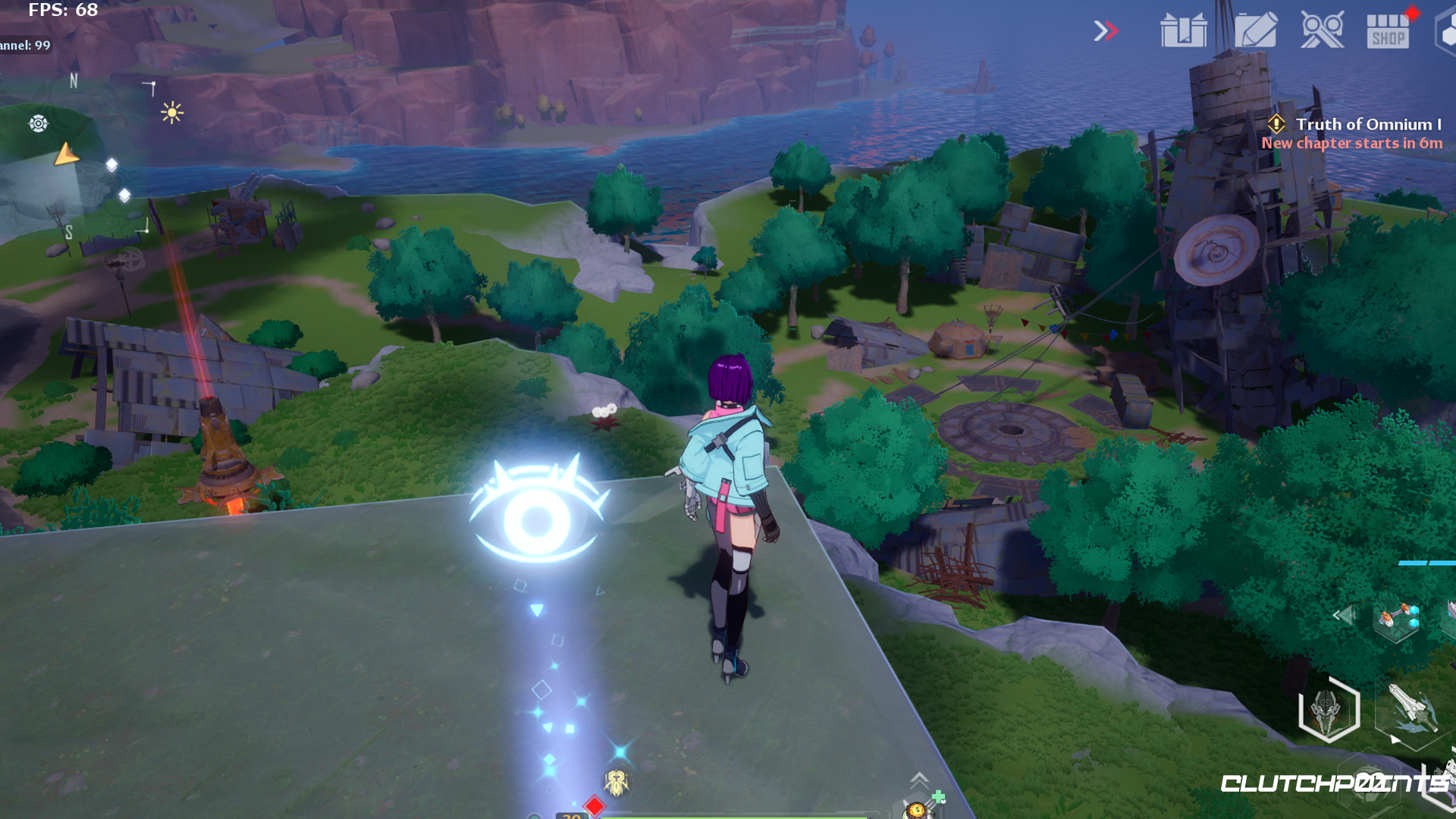 For more Tower of Fantasy guides and news, click here.