3 goals for Jaylon Smith in 2019 with the Cowboys

The Dallas Cowboys won the NFC East in 2018 on their way to a playoff run. One of their key contributors who helped get Dallas to the NFC Divisional Round was linebacker Jaylon Smith.

Smith was drafted 34th overall by the Cowboys in 2017. When he came into the NFL, he was coming off of a torn ACL that he suffered at Notre Dame.

He was talented enough for the first round but his injury contributed to him sliding in the draft. The Cowboys took a chance on him and so far it has worked to perfection.

The Cowboys’ season didn’t end as they wanted it to, losing to the Los Angeles Rams in the NFC Divisional Round. Regardless, it was a very successful season from America’s Team and they are looking to improve upon it in 2019.

The third-year linebacker has his sights set on helping Dallas take the next step forward towards a Super Bowl. Here are three goals for Jaylon Smith with the Cowboys in 2019.

Coming into the NFL, everyone knew the athletic freak that Smith was. Watching his tape at Notre Dame, you could see his potential as an every-down linebacker who could do everything.

Last season, we got a glimpse of what Smith could truly be as a linebacker. If there is anything you could critique on Smith’s game is his turnovers.

In his rookie season in 2017, Smith only started in six games so it was tough to make a huge impact for him. Then, last season he wasn’t able to get any interceptions but he was able to recover two fumbles.

The young linebacker will want to start forcing more turnovers to give his offense even more possessions. Ezekiel Elliott needs to eat and he’ll be fed more if the defense—along with Smith—force more turnovers in 2019.

The Cowboys had a solid season on the defensive side of the ball. That can be accredited to the talented pass rush, elite linebacker play, and productive secondary.

Who’s been on the team for the last two years to help shift the culture? Jaylon Smith. Smith has helped turn the Cowboys defense from good to elite with his high-level play in the middle of the defense.

The run defense from Dallas in 2018 was the most impressive aspect of their defense. Smith was going from sideline to sideline making tackles, racking up 121 total tackles last season.

Smith will want to keep trending upwards in his game and as a result of that, the Cowboys defense will continue getting better in 2019. 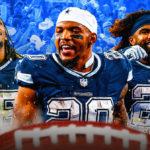 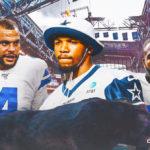 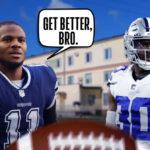 1. Have Another Healthy Season

Again, teams were skeptical on taking Smith when he declared for the draft in 2017. That was due to him suffering a torn ACL in his last game in college and his health was a question mark.

The athletic linebacker missed a majority of his rookie season, but did wind up playing in a few games in 2017. Last season, Smith was able to make it through all 18 games he played in, unscathed.

Health is the most important thing for these players. After all, these players have families and lives they have outside of football. They aren’t just forms of entertainment, they are human beings too.

Being healthy means even more to guys like Smith, who know what it feels like for an injury to affect him in a negative way. Starting in every game last season was a huge milestone for Smith after tearing his ACL almost two years ago.

The Cowboys’ star is hoping to repeat his injury-less season in 2018 with another one in 2019. If he gets another healthy season under his belt, it will look even worse for the teams who passed on him during the 2017 NFL Draft.