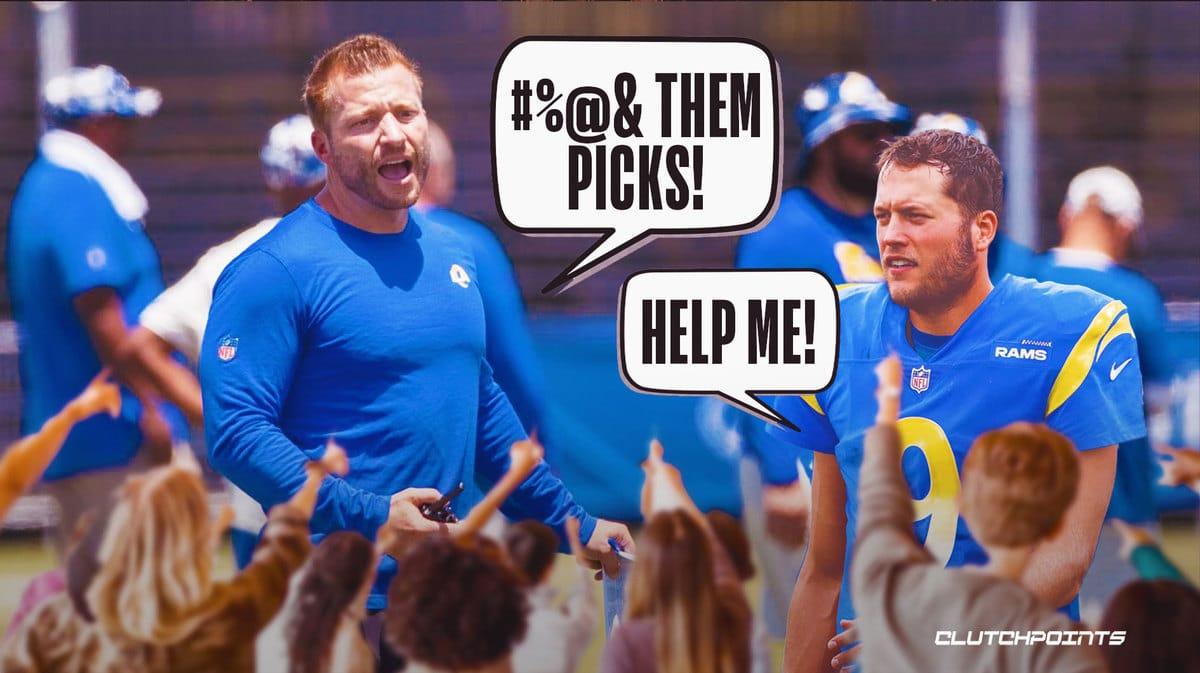 The 2022 NFL trade deadline is rapidly approaching on November 1, and with several trades already completed, it is shaping up to be one of the busiest deadline days ever. Like all trade deadlines in sports, some teams will be buyers leading up to the day, and others will be sellers. At 3-3, you’d think the Los Angeles Rams could go either way. However, the Rams trade deadline should be a busy one, as they will 100% be buyers this year. Sean McVay and the team have to bring in players like their season depends on it, because it does. If the Rams’ Super Bowl defense has a chance to go anywhere, it will because the team is a buyer at the NFL trade deadline for these three reasons.

3. The NFC is still wide open

At .500 after seven weeks, the Rams are squarely in the Wild Card race. And just a half-game behind the Seattle Seahawks, the team is still very much in the NFC West race as well.

After the Rams Super Bowl last season, the franchise knew there would be some drop-off. They lost Odell Beckham Jr., Von Miller, and Andrew Whitworth in the offseason and didn’t have a first- or second-round pick to help replace them.

Sean McVay and general manager Les Snead knew that if the team could just stay close, they could make some deals around the deadline and get the team into serious contention. It hasn’t always been pretty this season, but that’s exactly what they did.

Three games behind the undefeated Philadelphia Eagles, a Rams trade won’t get them into contention for a No. 1 seed in the conference. But they weren’t a No. 1 seed last season, and they won the Big Game anyway.

As mentioned above, the Rams lost Odell Beckham Jr., Von Miller, and Andrew Whitworth over the summer and didn’t have a first- or second-round pick to bring in fresh talent at those premium positions (WR, EDGE, OT).

And, unsurprisingly, that’s where the Rams are struggling the most this season.

The Rams have the seventh-least number of sacks in the league this year (12), have given up the fifth-most sacks (22), and no Rams wideout not named Cooper Kupp has more than 23 catches or 221 yards.

Luckily for LA, two of those positions — wide receiver and pass rusher — are among the most available for Rams trades at the 2022 NFL deadline. Pass-catchers like Brandin Cooks, Chase Claypool, and Kendrick Bourne could be available, and pass-rushers like Brian Burns, Bradley Chubb, and Jadeveon Clowney might be as well.

There are plenty of players available for the right price, and as buyers, the Rams can cash in on that just like they did last year with Miller.

And luckily for the Rams, they probably are willing to pay the right price because, as their coach and GM will tell anyone who will listen, they hate draft picks.

There is a famous (or maybe infamous) saying around the Rams facility that is so engrained Les Snead has even worn a t-shirt with the phrase emblazoned on it. That saying is, “f*** them picks.”

That is the way the team looks at draft picks and why Rams trades for players like Von Miller and Matthew Stafford have happened with such frequency in the past few seasons.

After struggling for years with former Rams draft pick Jared Goff at QB, LA went into full win-now mode. That means eschewing draft picks for proven veterans whenever possible. That helped the franchise put a team on the field for right now and is what will keep them as buyers at the NFL trade deadline until the wheels fall off.

Without an influx of young talent, the Rams will someday fall apart and have to strip the roster down to the studs and start again. That said, 2022 is not the season that will happen. With Cooper Kupp, Aaron Donald, Matthew Stafford, Jalen Ramsey, and other star players on the team, there is enough talent to justify again trading future draft capital for a player who can help now.

This strategy already helped the team win a championship last season. Can it create another Rams Super Bowl opportunity this season?

It certainly doesn’t look like it will with the offensive struggles from Stafford and the team this season. That said, the Rams weren’t a Big Game favorite last trade deadline when they got Miller and signed Beckham shortly after.

The day will come when the Rams finally have to become sellers with this strategy, but for 2022, the team is fully in the buyer camp.