After a surprising 8-0 start in the 2022 college football season, the Tennessee Volunteers were ranked No. 1 in the initial College Football Playoff rankings. The team had one of the most unexpected rises as it was out of the preseason rankings. However, Tennessee football came back to reality last weekend.

In an SEC East clash, the Georgia Bulldogs ended up winning 27-13, taking back the No. 1 position. The Bulldogs looked like the better team for most of the game, which contributed to the Volunteers’ fall in the rankings. Now at No. 5, Tennessee’s quest to make the CFP seems a bit more difficult.

Even though they are out of the top four, there are still paths for the Volunteers to make the CFP as long as they win their three remaining contests. The problem is that they do not control their destiny since they need some help from other teams. With that being said, here are three ways Tennessee football can still make the College Football Playoff.

This is perhaps the most difficult scenario because it requires the reigning champions Georgia Bulldogs to lose multiple games. Based on the remaining schedule, it looks improbable.

The Bulldogs have Mississippi State and Kentucky on the road, plus Georgia Tech at home. Mississippi State had its moments, but the team lost to now-ranked opponents LSU and Kentucky. Notably, they had a blowout 30-6 loss to Alabama. The Wildcats are No. 24 in the AP Top 25 poll but are just 3-3 in conference play, including a 44-6 loss to Tennessee. Finally, the Yellow Jackets are just 4-5 this season.

If Georgia loses multiple games and Tennessee finishes 11-1, the Volunteers would make the SEC Championship game. Winning the conference would most likely secure the Volunteers in the CFP. However, a loss to LSU, Ole Miss, or Alabama could knock them out as well.

Should Georgia keep playing like it is, this scenario seems more like a dream than a possibility.

Similar to Georgia-Tennessee, the Big Ten has a very important game this season. To wrap up the regular season, the Ohio State Buckeyes will host the Michigan Wolverines in Columbus, Ohio.

The Buckeyes seem to be in a great position for the CFP. As long as they do not lose in a blowout fashion, they should fall to No. 4 at most in case of a loss. The problem is that it means the Wolverines, who are in the CFP bubble, would jump in the rankings. That means Tennessee football would likely continue at No. 5, becoming the first team out.

On the other hand, if Ohio State dominates Michigan, this could result in the Wolverines falling out of the top four, similar to what happened to Tennessee after the game versus Georgia. But if the Buckeyes win in a close game, this could also benefit them and the Wolverines.

In addition to a blowout win by Ohio State, the Volunteers still need Georgia to win the SEC. Should the Bulldogs lose in the conference championship game to LSU, for example, the Tigers would likely get the spot that once belonged to Michigan.

This is perhaps the most likely scenario for the Volunteers. Again, the Bulldogs would need to win the SEC, not allowing LSU or Ole Miss to even be in the CFP conversations following the conference championship games. 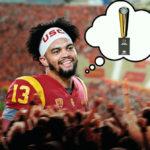 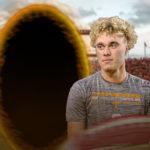 Another team that is surprising the college football world is TCU. The Horned  Frogs are currently 9-0, including six wins in the packed Big 12. The team has four victories over ranked teams, most notably the 55-24 blowout win over the then-No. 18 Oklahoma Sooners.

TCU has one of the hardest remaining schedules in FBS, starting with the No. 18 Texas Longhorns on the road this Saturday. Then, the Horned Frogs will travel once again, this time to face the Baylor Bears, who were once a top-10 team in 2022. TCU will conclude its regular season at home against Iowa State. The Cyclones were never ranked, but they played three ranked teams, losing by just one score in all opportunities.

Additionally, TCU would still need to win the Big 12 Championship Game after going undefeated in the regular season. That means the Horned Frogs would need to win four difficult games while Tennessee needs three victories versus Missouri, South Carolina, and Vanderbilt. The Gamecocks peaked at No. 25 earlier this year, but they already have three losses.

Comparing what TCU and Tennessee have ahead of them, this is the Volunteers’ best chance of finishing in the CFP top four.

In the end, Tennessee football would need some combinations to make it into the CFP. As long as they finish 11-1 in the regular season, the Volunteers will remain in contention for the top four.