While many believe reigning MVP Giannis Antetokounmpo of the Milwaukee Bucks is in the driver’s seat to repeat for the NBA’s most coveted award (in the regular season at least), the Greek Freak himself weighed in saying that perhaps the most “inspirational” player in the game right now is 35-year-old LeBron James.

Giannis on being inspired by Bron: "A lot of times we think that ‘Ok, we’re going to retire at 35, but seeing a guy at 35, being still top-3 best player in the world, that makes us want to be there.”

For the second season in a row, Antetokounmpo and James faced off in the All-Star game as the leading vote-getter in their respective conference, with both producing some staggering numbers.

After a stunning MVP campaign in 2018-19 for the Bucks, Antetokounmpo has actually improved some of his numbers this year, including upping his scoring to 29.6 points per game and his rebounds to 13.8 per game. Top those off with 5.8 assists per contest, 1.0 steals and 1.1 blocks and you have the making of an astonishing season and player.

However, Antetokounmpo is only 25 years old and approaching his prime (which is a scary thought in an of itself). On the other side of that coin is James, who is 10 years old and producing what is – maybe – his most impressive season.

Though some of James’s efficiency might have dipped this year, he is shooting better from deep than he did last year (35.1 percent vs. 33.9 percent), but his most striking work is being done with his passing, which has always been one of his most breathtaking gifts. 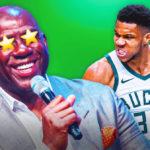 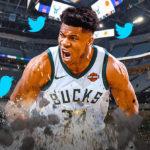 Clearly, James still has his fastball on offense, and the NBA’s reigning MVP is right to praise his incredible longevity.