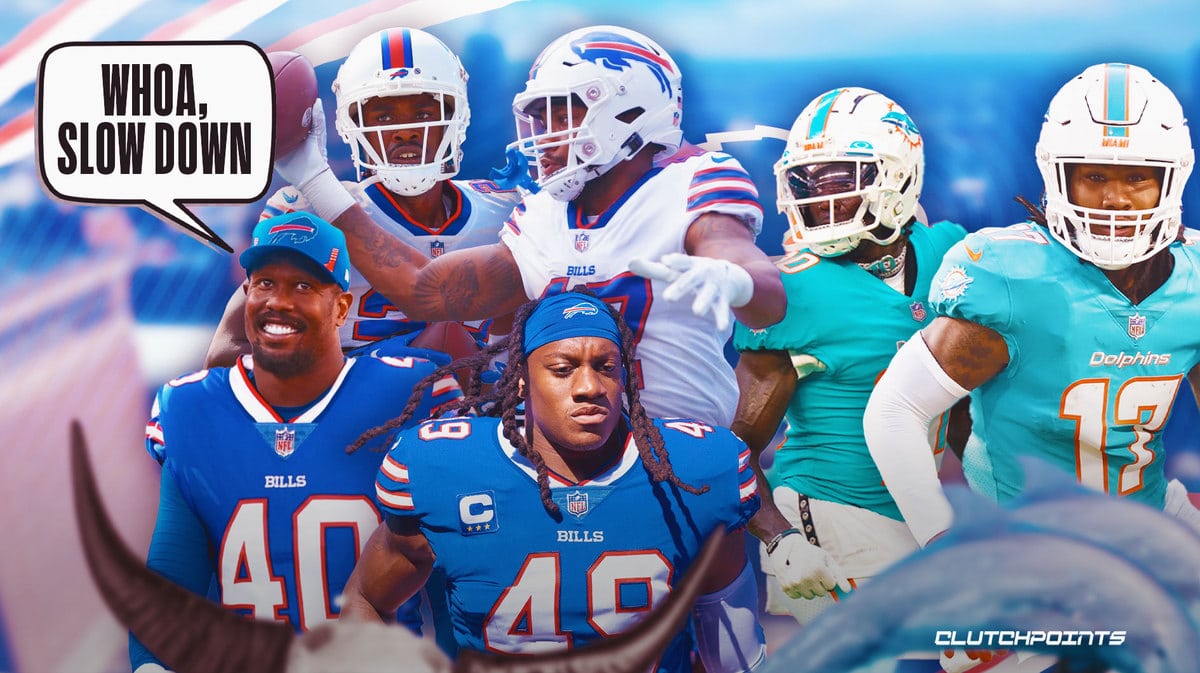 The Buffalo Bills Week 3 contest vs. the Miami Dolphins will be the first AFC East matchup for last year’s division champs. It is a game that will set the tone for the division for the rest of the season, so as the crucial Bills-Dolphins game nears, let’s make some bold Bills Week 3 predictions.

In the first two weeks of the 2022 NFL season, the Bills have run over the defending Super Bowl champs and the No. 1 seed in the AFC last season. The combined score against the Los Angeles Rams and Tennessee Titans is 72-17. It’s not quite “Bills by a billion,” but it’s pretty darn close.

The Bills-Dolphins game, though, is a matchup between two undefeated squads. Miami has also played well this season, picking up two big wins against the New England Patriots and Baltimore Ravens.

Week 3 will present some new challenges for Buffalo in the Bills-Dolphins battle, but are they enough to slow down the 2022 Bills buzz saw? Let’s take a look at what to expect vs. the ‘Phins with these bold Bills Week 3 predictions.

4. The Dolphins will score more points than any team against the Bills this season

The Week 3 Bills-Dolphins game features the three leading wide receivers in the NFL after two weeks. That means it will focus a lot on Tyreek Hill (284 yards), Stefon Diggs (270 yards), and Jaylen Waddle (240 yards).

With two of the speediest receivers in the league in Hill and Waddle, the Dolphins offense has moved up and down the field with relative ease this season. This speed will test any NFL defense, and Bills fans know exactly what happens when Hill gets the ball in his hands after last season’s playoff debacle in Kansas City.

The Bills are without cornerback Tre’Davious White, who is still recovering from last year’s ACL tear, and will likely miss Dane Jackson, who suffered a scary-looking neck injury on Monday night. Safety Micah Hyde left the last game early as well.

All these injuries will put a lot more pressure on rookie CBs Christian Benford and Kaiir Elam. And it means that the Dolphins will put up more points in Week 3 than the Bills’ first two opponents combined, who only managed 17 in two games.

3. Stefon Diggs will continue his run of dominance

On the Bills’ offensive side, WR Stefon Diggs has been every bit as good so far this season as Hill and Waddle. In addition to being second in receiving yards, he’s also second to Cooper Kupp in receptions (20) and first in receiving TDs (4).

Usually, Dolphins CB Xavien Howard would be likely to play Diggs to a draw in a matchup like this, but the All-Pro cover man is dealing with a groin injury. Even if he does play Sunday (after not practicing on Wednesday), Howard won’t be his usual shutdown self.

Look for Diggs to take advantage of this and stay on his roll. Seven-plus catches, 100-plus yards, and at least one more touchdown seem about right for this bold Bills Week 3 prediction.

With two of the three leading pass-catchers in the league thus far, it makes sense that Dolphins QB Tua Tagovailoa leads the league in passing with 739 yards in two games. Josh Allen is over 120 yards behind Tua. But, in fairness, Allen took a seat at the end of the third quarter in Monday night’s blowout.

Tagovailoa is a polarizing QB that is starting to prove some of his doubters wrong after two excellent outings to start the season. However, two games is a very small sample size, and to be a bona fide superstar QB in the NFL, you have to get the job done week after week as Allen does.

This Bills-Dolphins game isn’t a referendum on Tagovailoa’s long-term future. It will bring him back down to earth a bit, though.

Between the Bills pass-rush pinning their ears back and getting after him and Josh Allen being Josh Allen on the other side of the field, the young Dolphins signal-caller will have some moments, but, overall, realize he still has a long way to go to get to Allen’s level.

This will be the Bills’ toughest game to date. But that doesn’t mean it will be overly taxing for the team that’s looked the best overall in the first two weeks of the season.

The bold Bills Week 3 prediction here is that this Bills-Dolphins tilt will follow the exact same script Weeks 1 and 2 did.

Both teams will come out fast and score early. The Bills and Dolphins will even trade scores throughout the first half, going into the locker room 17-17. Just like in the last two games, though, Buffalo will figure it out during the locker room pep talk and come out swinging.

In half two, the Bills pass-rush picks up, Allen gets sharper, and the Bills outscore the ‘Phins 21-3 in the final two frames to take home the comfortable win and first place in the AFC East.