With so many big-name players potentially entering free agency this summer, teams and fans alike are doing whatever they can to try and convince their favorite free agents why their city is the best place to come play. The most highly touted of those free agents will most likely be Oklahoma City Thunder star, Kevin Durant, and fans from all over the country are doing whatever they can to recruit him to their respective hometowns.

One Celtics‘ fan (and apparent seafood restaurant owner) went so far as to offer Kevin Durant free crab legs if he goes to the Boston Celtics.

Boston-based Legal Seafoods is offering Kevin Durant unlimited crab legs if he signs with the Celtics this summer. pic.twitter.com/XGftfnuN30

While we’re not sure how big of a fan Kevin Durant is of crab legs, the offer sounds like a hard one to turn down.

After an amazing playoff run and nearly taking down the defending champions, it’s hard to see Durant leaving OKC. That said, he has already expressed some interest in playing for the Celtics and his agent has already met with the team. 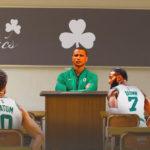 Regardless of whether Durant comes to Boston or not, the Celtics’ future looks promising. They finished the 2015-16 season with a 48-34 win-loss record and now have five of the top 35 picks (including 3rd overall). But Durant moving to a solid Eastern Conference team would certainly shakes things up.