As the vast majority of you already know, Draymond Green kicked Steven Adams below the belt in last night’s Game 3 between the Oklahoma City Thunder and the Golden State Warriors. There have been arguments about whether or not it was intentional; what can’t be debated is that Green’s foot connected with Adams in a very comprising spot.

Afterward, Carmichael Dave of 1140 The Drive made an interesting observation that raised a lot of eyebrows, questioning the narrative of Draymond Green’s antics compared to those of DeMarcus Cousins.

It drew enough attention on Twitter to actually come across Boogie, who made a simple, but demonstrative, response.

Essentially, the argument being made by Carmichael is that Green and Cousins both have fiery attitudes that come out when their respective teams are losing. The difference, of course, is that the Sacramento Kings have racked up quite a few more losses than the Warriors as of late, allowing the narrative of Cousins to go in the opposite direction of Green. 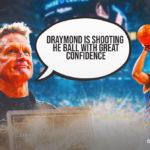 Boogie isn’t calling out Draymond here. He’s firing back at all of the people who praise Green’s mentality on the court, but then scorn his own.