Did Herm Edwards get fired while walking off field after Sun Devils’ loss to Eastern Michigan? Herm Edwards and Arizona State lost 30-21 at home against Eastern Michigan this weekend, making them 1-2 on the year. The team announced Sunday that they were firing Edwards after four full seasons.

In a video that surfaced on Twitter on Sunday, it appeared that Herm Edwards was fired before he even got off the field on Saturday. Take a look for yourself:

Herm Edwards was met by the ASU President and AD on the way off the field last night.

I’ve heard of getting tarmac’d but I think Herm is the first coach I’ve seen to get end zone’d… pic.twitter.com/GLQXU5XC9F

Before Herm Edwards could exit the field, he was met by Arizona State President Michael Crow and Athletic Director Ray Anderson. Crow struggles to make eye contact with Edwards, and it appears they are consoling him for the bad news they are delivering. The three then walk off the field together.

An absolutely bizarre sequence. Who knows if they told him he was fired right there or not, but either way, this is embarrassing for Herm Edwards and the Arizona State program.

Herm Edwards was 26-20 in his four plus years at Arizona State, winning just one bowl game. Edwards led the Devils to nothing beyond mediocrity in his four seasons, and as a result, he needed to go.

Arizona State has dealt with its fair share of scandals during Herm Edwards’ tenure as well. A large investigation that started back in 2021 is still underway, and this led to multiple coaches and star players leaving the program.

Things won’t get better for Arizona State as they are now without a head coach, and they go on to face the #13 ranked team in the country, the Utah Utes this coming Saturday. Lots of questions need to be answered in Tempe. 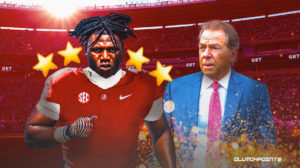