On Monday night, Dwyane Wade played a huge role in the Miami Heat‘s overtime victory over the Toronto Raptors. Wade’s 30 points were pivotal as Miami evened up the second round series at two games apiece.

Early on, a fadeaway jumper by Wade marked a historic milestone for one of the game’s great shooting guards. The shot moved Dwyane past legendary Lakers point guard Magic Johnson for 13th all-time on the NBA’s playoff scoring list.

Despite a number of nagging injuries, Wade has been a force for the Heat throughout the playoffs and especially against the Raptors. In the second round, D-Wade has turned back the clock with 27 points per game on 50 percent shooting.

Knee issues have hampered the second half of Wade’s career, but people forget how dynamic he can be on the court when everything is working. He’s finding that extra gear that we haven’t seen for the Flash in a little while.

There’s more: Magic isn’t the only iconic player that Wade has surpassed this postseason. 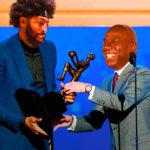 (They're all pretty good.)