Patrick Beverley made headlines again on Tuesday after he was ejected in the fourth quarter against the Phoenix Suns. The Los Angeles Lakers veteran was asked to leave the playing court after shoving Deandre Ayton to the ground in an intense moment late in the contest.

After the game, Suns star Devin Booker had some words to say to Pat Bev through the media. Booker pretty much questioned Beverley’s manhood after the latter shoved Ayton from behind:

“Pat needs to stop pushing people in the back, man,” Booker said. “Push ’em in the chest. That’s all I got to say.”

For those that require context, this isn’t the first time Beverley has shoved a Suns player while they weren’t looking. A couple of years ago, the 6-foot-1 combo guard also shoved Chris Paul from behind in the dying moments of an intense playoffs matchup between Phoenix and Beverley’s former team, the Los Angeles Clippers.

Beverley was then asked to comment on Booker’s call-out, to which the Lakers veteran surprisingly refused to engage:

“Yeah, I’m not going back and forth with all that,” Beverley told reporters after the game (h/t ClutchPoints on Twitter). 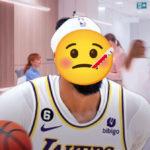 "I'm not going back and forth with all that."

Patrick Beverley in response to Devin Booker's comments after the Lakers-Suns game.pic.twitter.com/zZk9fwG6AC

There is obviously no love lost between Patrick Beverley and the Suns, and you can be sure that both sides will be keeping this incident in mind the next time they meet on the basketball court. These two teams battle it out again on December 19th in Phoenix, and we fully expect some animosity in that one.