Paolo Banchero is set to wield a lot of magic in Orlando this coming 2022-23 NBA season. He is one big reason why many experts gave the Orlando Magic a high offseason grade.

The Magic surprised most draft pundits by selecting Banchero first overall, but the team seems to be in good shape after Banchero has impressed this offseason. Recall that at the Las Vegas Summer League, Banchero displayed excellent play. That points to a promising future in the cards for the Magic.

Having said that, the Magic do have some other intriguing pieces. Markell Fultz, Jalen Suggs, and Franz Wagner make for an interesting perimeter triumvirate even as Wendell Carter Jr. and Mo Bamba comprise an interesting if uneven pair of big men. Last year’s leading scorer, Cole Anthony, is also still in the mix, though he will most certainly not be their top scorer in the coming season.

Will all these be good enough to make the Magic a playoff contender this season? Let’s see.

2) The Magic will finish dead last in the East

The forward and center positions for the Magic are loaded with young potential. The aforementioned Wagner, Banchero, and Carter should thrill Magic supporters greatly.

In fact, during the 1,523 total minutes that Wagner and Carter played on the court together last season, the Magic were just minus-0.5 points per 100 possessions. That’s not horrible going by the team’s standards.

Coach Jamahl Mosley may have trouble allocating playing time up front with Bamba still around in addition to the comebacking Jonathan Isaac, and third-year forward Chuma Okeke.

The big question mark is in the backcourt. As of the moment, it is still unclear whether the roster contains a guard capable of competing against the high-level starters of other clubs. Sophomore guard Jalen Suggs can be aggressive defensively, but he still has to improve on the other end of the floor after recording the lowest effective field goal percentage (40 percent) for a player with at least 400 field goal attempts over the previous seven seasons.

The aforementioned Cole Anthony led the team in scoring, but he struggled on defense. For his part, Markelle Fultz returned after a year-long sabbatical late in the previous season. He also showed off some impressive playmaking skills, but he has yet to demonstrate any consistency with his perimeter shooting.

Truth be told, there is an abundance of exciting young talent in Orlando. Their growth should make the team better in 2022–2023. However, it is quite unlikely that they will be able to break their slump of being a bottom-10 offense or contend for even a place in the Play-in tournament.

1) Paolo Banchero will be ROY

The biggest bright spot for the Magic Kingdom will be Banchero. For many fans, it was easy to have a very good impression of the No. 1 overall pick after the Las Vegas Summer League. People also expect the Magic to place the ball in his hands and ask him to create and score.

As per oddsmakers, Banchero is the leading candidate for ROY. After all, he already has the physique and abilities of a solid NBA player. Things should only get better from now for the young high-flyer.

Going into his rookie season, the former Duke standout has also kept himself busy by competing in Seattle’s biggest Pro-Am event and scoring 50 points in a game. Banchero had the chance to play alongside Chet Holmgren, who was chosen immediately after him on draft night. Holmgren also impressed in that game, contributing 34 points and 14 rebounds of his own, in their team’s 122-107 triumph.

Paolo Banchero WENT OFF for 50 PTS in his hometown of Seattle, WA at the @thecrawsover!

Aside from dumping 50-pieces on the court, Banchero has negotiated endorsement deals with Jordan Brand. He has also made crucial business decisions. The kid sure looks to have a good head on his broad shoulders.

By season’s end, those shoulders might have to carry the weight of the ROY trophy as well. 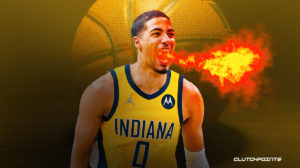