Just weeks after the Dallas Mavericks were eliminated from postseason contention, they’ve made their big move of the offseason. The best part is it didn’t cost them much, either.

The Mavs swung a trade with their crosstown rival Houston Rockets for big man Christian Wood, giving up a relatively modest package consisting of a late first-round pick and a few veterans who didn’t play a major part in their offseason rotation. The biggest loss is seeing Boban Marjanovic go, but on the court the net impact swings heavily in Dallas’s favor.

Sources: The Mavericks are sending Boban Marjanovic, Sterling Brown, Trey Burke, Marquese Chriss and the No. 26 pick to the Rockets for Christian Wood.

The move is a low-risk, but potentially high-reward gambit for the Mavs. Christian Wood projects to be exactly the type of impact player that the team needs in the frontcourt with Luka Doncic. For a team that was right at the doorstep of its first NBA Finals berth in over a decade, it could be the move that puts them over the top next season.

Here are two (2) reasons why the Christian Wood trade turns Luka Doncic, Mavs into serious contenders next season in ways that the Kristaps Porzingis deal did not.

He’s Kristaps Porzingis – but without the baggage

Christian Wood is a 7-footer with a condor-like wingspan and who can throw down thunderous dunks on the inside but also stretch the floor as a real three-point threat. His bounce and length make him a legitimate rim-protector as well.

Doesn’t that sound awfully familiar for Mavs fans? Kristaps Porzingis promised those very same traits when he first arrived via trade back in January of 2019. But while there may be some on-court similarities to what the Mavs are getting, there’s a massive amount of baggage they won’t have to deal with in getting Christian Wood.

For starters, the deal basically just cost them a bottom-five first-rounder. They originally sent out an unprotected first-round pick and Dennis Smith Jr., who still had some value as a lottery pick back then. With such a trade, there was already added expectation that the trade needed to deliver the right ROI.

On top of that, Kristaps Porzingis came with the label as a franchise player coming from the New York Knicks. While he was never even in the same stratosphere as Luka Doncic in Dallas, there was always tension about the pecking order on the team and making sure KP was happy and involved.

Christian Wood likely doesn’t have the same concerns coming into a Mavs team that may just be missing one big piece. He’ll fall in line behind Luka Doncic without a shadow of a doubt.

One huge difference between Kristaps Porzingis and Christian Wood will be in building synergy in the pick and roll with Luka Doncic.

For starters, the willingness to be the roll man is already a huge part of that. It’s never the most glamorous job. Dwight Howard famously wanted more post-ups rather than serving as the roll man on offense, despite the fact that the latter was often a much more effective play for the offense.

Kristaps Porzingis wanted a much bigger role in the offense than simply supporting Luka Doncic as a roll man. Initially, it made sense given that he was a two-time All-Star coming in. But after the Mavs’ latest postseason run, it’s clear that an offense centered around Luka Doncic could be enough if the right weapons were available – and not causing tension in the locker room.

Christian Wood, meanwhile, knows is as the roll man. He’s managed to be one of the league-leaders in points per game as the roller on pick and rolls in the past two seasons. That’s playing with some erratic playmakers in Houston for the majority of the time coupled with a few brief stretches with James Harden and John Wall alongside him.

But during the 2019 season, with a resurgent Derrick Rose as his primary dance partner, C-Wood ranked in the 95th percentile in points per possession on pick and rolls. Imagine what he can do with Luka Doncic setting him up instead of Jalen Green or a late-career D-Rose. 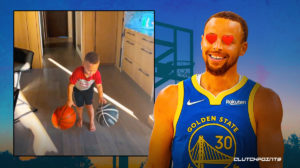