The Milwaukee Brewers take on the St. Louis Cardinals. Check out our MLB odds series for our Brewers Cardinals prediction and pick.

Eric Lauer takes the ball for the Brewers, while Jordan Montgomery goes to the hill for the Cardinals.

Eric Lauer has a 3.59 ERA. He stumbled to a 6.83 ERA in June, but he promptly bounced back in July with a 2.96 ERA. He has allowed precisely one run in four of his last six starts, and he has allowed more than two earned runs in only one of his last six starts. He is in a very good place right now, and he will need to stay there if the Brewers are going to outduel the Cardinals in the National League Central race. This game starts a huge series. Lauer gets a chance to make a season-defining statement on the road in Missouri.

Jordan Montgomery did a very solid job at the back end of the New York Yankees’ rotation. His trade to the Cardinals in exchange for outfielder Harrison Bader was met with anger from Yankee fans. If Frankie Montas doesn’t make a substantial contribution to the Yanks, the intitial reaction to the Montgomery trade will turn out to be correct. Montgomery had to face the Yankees in his first start as a Cardinal this past Saturday. He didn’t give up a run. He combined with several relievers for a 1-0 win over New York. Montgomery knows what it’s like to be part of a playoff team. The Cardinals are counting on him to win this game and increase the odds that St. Louis will play in the 2022 postseason.

Courtesy of FanDuel, here are the Brewers-Cardinals MLB odds.

The Brewers just won two games against the battle-tested Tampa Bay Rays. They had a horrible week right after the Josh Hader trade, but they bounced back. They also noticed that Hader blew a three-run save opportunity earlier this week. The fog of the first 72 hours after the Hader trade has lifted. The Brewers have been better than the Cardinals in recent years. Now is a chance to reassert their superiority. Jordan Montgomery is a good pitcher, but let’s not pretend he’s an ace. He isn’t. Rowdy Tellez, who has had a very good year for the Brewers, can mash against him. Milwaukee has had an up-and-down season, but now is the time to shine, and this team figures to be ready. Eric Lauer is pitching really well for this team at the moment.

After seeing Jordan Montgomery pitch against the New York Yankees, the Cardinals have to think they made a great trade and got some quality starting pitching for the playoff push, which is exactly what they needed. Montgomery can set the tone in this game, and one can easily make the case that he is a better pitcher than Eric Lauer. Paul Goldschmidt and Nolan Arenado are hitting the ball well. They can get to Lauer in the early innings and give Montgomery a cushion. The Cardinals just had a miserable stay in Coors Field in Denver against the Rockies. In Busch Stadium, their pitchers will perform a lot better.

It’s a super showdown series. Do we really know whether the Brewers or Cardinals are the better team in the National League Central? If you have a strong feel for that question, pick a winner here. Most of us are sitting back and waiting to see who will emerge, which means this is a stay-away game. If you absolutely insist on a pick, lean to Montgomery over Lauer. 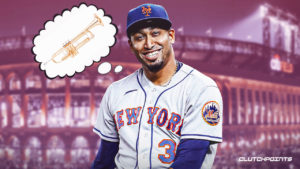