A pair of squads whose playoff aspirations are out the door in the final couple of days of the regular season will go head-to-head as the Arizona Diamondbacks will meet up with the Milwaukee Brewers out on the diamond this evening. It is time to take a look at our MLB odds series, where our Diamondbacks-Brewers prediction and pick will be made.

Even though the Diamondbacks may be concluding another season with a losing record, Arizona can at least hang their hat on the fact that they have proven to the rest of the league and more importantly themselves that they are headed in the right direction in the coming years. After getting bested by the Brewers on Monday by a score of 6-5 in extra innings, Arizona will send out their ace in Zac Gallen one last time before the offseason begins. Thus far, Gallen has been untouchable with a 12-3 overall record and a majestic 2.46 ERA to boot.

As for the Brewers, they will be missing out on the postseason festivities after only a year ago saw Milwaukee take the NL Central crown and reach the playoffs. Without a doubt, the 2022 season has been disappointing for this organization and the players and coaches in it, but Milwaukee can at least find some solace by racking off a couple more wins down the stretch against Arizona. Getting the nod in this one from the mound will be the southpaw in Eric Lauer, who is 10-7 with a 3.83 ERA in his 28 starts on the season.

Here are the Diamondbacks-Brewers MLB odds, courtesy of FanDuel.

After losing a whopping 110 games last season, the Diamondbacks have rebounded nicely this year with a hefty balance of some young and hopeful talent that Arizona will hope to build upon in the future.

With only two games remaining against the Brewers starting with a showdown tonight in the “Dairy State”, nothing would please manager Torey Lovullo more than stringing together a couple of wins before the D-Backs start hitting up their local golf courses for some tee times. When it comes to tonight’s matchup, Arizona will need to put their foot down and do a better job of closing out the game. Last night, it was the bullpen that couldn’t maintain the lead, as Arizona’s relievers failed to record some key outs down the stretch. Don’t be surprised if Arizona leaves starter Zac Gallen in the game as long as possible to give this average bullpen a rest and to avoid them from pitching in critical moments with the game on the line.

From a hitting perspective, it appeared that Arizona certainly did enough to be able to secure the win yesterday with five runs off of seven total hits. With Gallen slated to take the mound, the D-Backs may not need to score a plethora of runs to cover the spread. Not to mention, but this lineup and its ability to muster up runs have been one of the team’s strengths this season, as the D-Backs have generated a total of 698 runs which ranks as the 12th-most in the league nearing the end of the season.

Despite embarking on a furious rally that saw them overcome the Diamondbacks 6-5 in ten innings, the Brewers’ playoffs hopes were dashed when the Phillies were able to clinch a postseason spot of their own by coming up with a 3-0 victory at Houston. It will be the first time the Brewers have missed out on the postseason since the 2017 season. While Milwaukee is most likely in a gloomy mood this Tuesday, the Brewers must quickly rebound and finish their season strong starting with a home matchup versus Arizona. 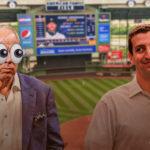 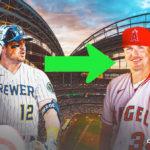 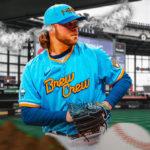 Brewers break silence on going to arbitration with Corbin Burnes

To begin, in order to cover the spread against the D-Backs and inject some life into this saddened Brew Crew roster, it is vital for Milwaukee to ride their southpaw as much as possible. As a whole, the Brewers have pitched well enough to be considered a playoff-worthy team, as Milwaukee possesses the 13th best team-ERA, the 14th-most quality starts from starters and the fifth-best batting average against allowed at a .229 mark. Combine this with the fact that Eric Lauer has compiled a 2.76 ERA in eight career starts versus Arizona, and all of a sudden the Brewers look like a team that can have a triumphant victory this evening.

Not to mention, the Brewers will need to get off to a faster start and not wait until the final innings to receive production at the plate. Even though they were victorious, putting up runs on the scoreboard in the early frames of this one will further increase their chances to cover the spread.

At first glance, this is a matchup where both teams are looking to conclude their regular season in the right manner. However, the fact that the Brewers currently sit as the underdogs ahead of this one at +1.5 with Lauer on the mound should be a no-brainer to side with Milwaukee.