Durant’s trade request has put the team in a precarious position. Do they adhere to his request and trade him or try to make it work with Durant still on the roster? For weeks, it has been assumed that Durant’s time in Brooklyn was up.

A recent meeting between Durant and Tsai revealed that Durant would be willing to rescind his trade request on one condition: Tsai needed to fire Nash and Marks.

It now appears Tsai has made his decision.

Our front office and coaching staff have my support. We will make decisions in the best interest of the Brooklyn Nets.

While the Boston Celtics, Toronto Raptors, and Miami Heat remain the most significant candidates to acquire Durant, the trade market for the 12-time NBA All-Star is moving at a snail’s pace.

The 2021-22 season was Nash’s second as an NBA head coach. The team struggled with injuries and Kyrie Irving was limited to just 29 games after being ruled ineligible to play home games due to New York City’s COVID-19 vaccine mandate at the time.

During the season, James Harden was traded to the Philadelphia 76ers for Ben Simmons and after a 44-38 regular season finish and a disappointing first-round sweep at the hands of the Celtics, the Nets are in limbo.

Outside of Durant’s trade request, Irving is reportedly on the trading block. Even Simmons, who has yet to play a game in Brooklyn, is in trade rumors.

The Nets are prepared to start the season with Durant on the roster but with Tsai publicly choosing a side it seems unlikely this story will have a happy ending. 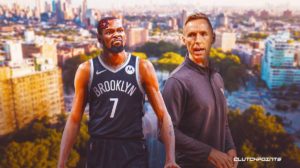 JUST IN: The overlooked factor in Nets’ Kevin Durant situation that is befuddling the NBA
Related TopicsBrooklyn NetsJoe TsaiKevin Durant