Washington Redskins running back Adrain Peterson is considered to be one of the best in NFL history at his position. He’s also a role model for the younger players in Washington’s locker room.

Redskins quarterback Dwayne Haskins spoke to the team’s media at NFL Honors and touched on a few topics, including what Peterson means to him:

“He’s an example on and off the field of what it is supposed to look like,” Haskins said, per the team’s official website. “How to work and someone to look up to especially in the locker room.”

Haskins didn’t leave NFL Honors with an award, but Peterson did. The Redskins veteran won the Art Rooney Sportsmanship Award:

“It means a lot,” Peterson said of winning the award, via NBC Sports. “When it came out, I was just smiling ear to ear because it goes to show the person that you are — and it comes naturally — is seen, is noticed and recognized by your peers. So to be up for the award is a blessing. There have been great winners before, and to be able to be added to that group, it’ll be a dream come true.” 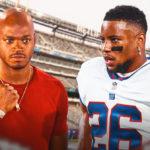 Saquon Barkley reveals the key message he received from Adrian Peterson ahead of Giants’ wild-card clash vs. Vikings 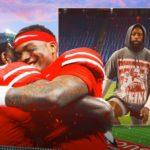 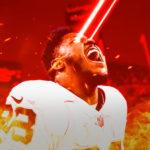 In his 13th NFL season in 2019, Peterson rushed for 898 yards and five touchdowns on 4.3 yards per carry. Despite the Redskins’ lack of success, he showed he still has plenty left in the tank.

Peterson remains productive and is an important voice in a Redskins locker room that will surely undergo change with Ron Rivera in as head coach. Though he may not be the lead back in 2020 with Derrius Guice returning, he is a valuable asset for Washington.