The Toronto Raptors and Serge Ibaka have agreed to a three-year deal worth $65 million, according to ESPN’s Adrian Wojnarowski.

This huge development takes out one item off the plate of Team President Masai Ujiri, putting the Raptors in a better position to entice All-Star point guard Kyle Lowry back to their fold.

Ibaka, 27, returns to Toronto on a rather fair deal considering the salary cap jump and the fact that other teams could have easily nabbed him instead had the Raptors not acted swiftly and decisively. He will be entering his ninth season in the NBA. 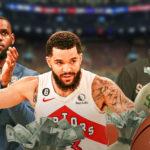