Houston Rockets guard Jalen Green is turning into one of the most electrifying players right before our eyes. If you need proof, then look no further than his performance on Saturday against the Oklahoma City Thunder.

Saying that Green put on a show would be an understatement, as he hogged the spotlight and entertained the crowd with his incredible scoring and acrobatic plays that’s just really difficult to pull off. Perhaps the highlight of the night was his monster alley-oop late in the third quarter off a Kevin Porter Jr. assist.

Even Green himself was surprised he made the catch and threw down the basketball with ease.

Jalen Green has always been known for his athleticism, and this 2022-23 season, he has definitely taken a step forward in using his physical tools to improve his scoring. Prior to Saturday’s contest, he was averaging 21.5 points, 4.4 rebounds and 3.6 assists on 42.1 percent shooting.

Against the Thunder, he finished with 28 points, three rebounds and nine dimes for the Rockets. Oklahoma City just had no answer for him as Houston dominated from start to finish for the 118-105 victory. 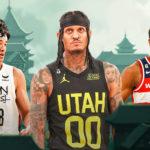 It’s still early in the campaign, but Green has already compiled highlight reel materials that are more than enough for the year. As he keeps going, though, there will be a lot more plays like that insane alley-oop he did.

What a great time to be a Rockets fan. Who wouldn’t want to see Green evolve into a superstar that he definitely has the potential to be?