The hype surrounding Trae Young has been crazy, even before he made his first bucket in the NBA. Whether you’re an NBA cards fanatic or just a casual hoops fan, you’d probably heard of the young man’s exploits. The 22-year old guard from the University of Oklahoma was always considered a top prospect, especially after notching 27.4 points and 8.7 assists during his collegiate career. After being picked 5th in the 2018 Draft, Young went out and backed all the hype up about him on the court.

Young’s first season went slow at first and exploded during the second half. Nonetheless, he posted 19.1 points and 8.1 assists as a rookie. His sophomore year was when the guard took a leap and really made a name for himself in the NBA. During that campaign, Young averaged 29.6 points, 9.3 assists, and 4.3 rebounds. He was also named as a starter in his first appearance in an All-Star game that year.

Now in his third season, Young is currently in a place he has never been in before – leading the Atlanta Hawks for a spot in the playoffs. Currently, they are in sixth place in the East with a 23-23 record. With less than two months before the postseason begins, Young is in a prime position to take another leap soon. But before that happens, we take a look at his value in the card market after 44 games this year.

A Look At Young’s Performance This Season

Out of the 46 games Atlanta has played this year, Young has been present for 44 of them. During that time, the third-year point guard is averaging 25.6 points, 9.4 assists, and four rebounds in 34.5 minutes per contest. He’s also displaying good efficiency with his shot selection by draining 48% from the field, 87% from the free-throw line, and 36% from downtown.

Young’s offensive repertoire was on full display towards the last week of January when Atlanta faced off against the Minnesota Timberwolves. Ice Trae notched 43 points in 30 minutes to lead the Hawks to a win. Young connected eight of his 12 attempts from downtown during that game, which equates to an elite 67% three-point rating.

On the other side of the fence, there are two downsides to Young’s year – his atrocious defense and the Hawks performance under Lloyd Pierce, First, the point guard has a 1.7 defensive box plus/minus rating, placing him 167th in a list of 180 active players right now. Second, before Pierce was fired at the start of March, Atlanta owned a disappointing 15-19 record, which placed them outside of the playoff race. Young’s inability to lead his team to a winning record back then, coupled with his defensive deficiencies, has somehow caused fans to slightly lose interest in him.

Nevertheless, Ice Trae remains to be one of the NBA’s brightest young stars right now. With the ship corrected in Atlanta, thanks to Nate McMillan, Young and the Hawks are finally trending in the right direction.

The State of Trae Young Cards in the Market

Before the 2020-21 NBA season started, Young was one of the names everyone was hyping about. The Hawks acquired a couple of veterans during the offseason, which signified the franchise’s intent to surround their star player with enough talent to reach the playoffs. That’s why at the start of the year, Young’s PSA 10 Prizm rookie card commanding an average of $850 on eBay. 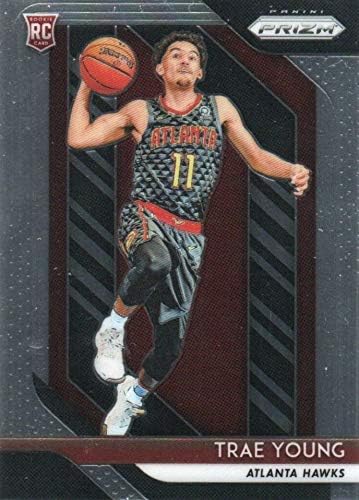 After more than a month, the price went down to $432, due to the Hawks’ losing skid during this time. Even though Atlanta has surged in the standings, Trae Young cards in the market has continued to drop further in value. Just this week, the price of his PSA 10 Prizm rookie card is now at $355. That’s more than 50% from Young’s value when 2021 started.

Compared to Luka Doncic, Young’s card value hasn’t lived up to his massive hype right now. This is a good thing for those planning to invest in the Hawks franchise player. It’s a given that Young is his team’s number one guy and it’s only a matter of time before he reaches the playoffs. It would be wise to monitor his prices until they bottom out and enter from the point. In this way, your investment in Trae Young rookie cards will have a lot of room to grow, especially if Atlanta makes a deep run in the upcoming postseason.

Trae Young in the playoffs isn’t a matter of if, but when. If you’re willing to be patient on investing in the Hawks superstar, his cards could very well reward you.