Shaq reveals his worst teammate ever, but it’s not who you think Los Angeles Lakers legend and Hall of Famer Shaquille O’Neal is not only one of the most dominant centers of all time, but he is also one of the most expressive players the league has ever seen. Known for his comedic stylings, Shaq didn’t necessarily get along with all of his teammates, most notably beefing with the late Kobe Bryant in the early 2000s, going to great lengths just to one-up his frenemy whom he has since mended fences.

Nevertheless, Shaquille O’Neal knew when it was winning time, and when it was time to focus and give it his all, Shaq was able to lead the Lakers to three straight championships, winning three Finals MVP honors during the three-peat. Thus, it’s not difficult to see why Shaq, of all the players he could have chosen, picked Dennis Rodman as his worst teammate ever.

“[Dennis Rodman] was a great player, but he made it hard. Like when you try to corral the guys together and the people above you [are] letting this one guy do whatever he wants. So we had to be there an hour before the game. He’d come in fifteen minutes before the game eating chicken and rice. While the coaches are talking, he would jump in the shower. Cold shower. Come and give you 15-20 rebounds,” O’Neal shared in his own podcast, The Big Podcast with Shaq.

Sure, it’s not surprising to see Dennis Rodman as the choice, as Rodman is known for his antics off the court which became a distraction during the Bulls’ quest for a second three-peat. But not everyone remembers that The Worm played one season for the Lakers back in the 1998-99 season, averaging 11.2 rebounds in a brief 23-game stint. The Lakers weren’t yet the dominant team they were in the early 2000s when Rodman was in town, but The Worm definitely left an indelible mark on Shaquille O’Neal’s storied career. 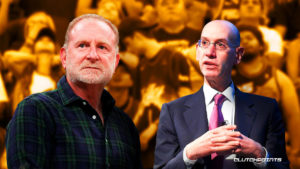