Chris Paul’s winning mentality is just different, and it’s one of the reasons why the rest of the NBA should keep an eye on the Phoenix Suns.

Over the past couple of years, Paul has developed a reputation for being a franchise-altering player for young teams. He showed it with the Oklahoma City Thunder after he led the young team to the 2020 playoffs with a 44-28 record–this despite preseason predictions that the team would be one of the bottom-feeders in the ultra-competitive Western Conference.

After that, he worked his magic again with Phoenix, this time helping lead the franchise to the NBA Finals. To recall, the Suns hadn’t make it to the playoffs in a decade before Paul came and transformed the team into a winning franchise. Of course he didn’t do it alone, but he was a big reason the team was able to compete like they did in the 2021 postseason.

Now, in a recent talk with SiriusXM NBA Radio, Paul was asked about the success he has had with younger teams. CP3, however, admitted he never changed his mentality be it with a younger team or a veteran squad, adding that he always plays and competes to win.

“I think it was just who I am. I don’t care who you put me out on the court with, I’ve always been like that. I don’t care what team it was, as long as I’m on the court, we got chance to win. A really, really good chance if you ask me,” the Suns star said.

Now that’s some confidence, and it’s not as if it doesn’t have any merit. Chris Paul has shown time and time again that he is one of the best floor generals in the NBA today, and with him on the floor, the Suns should be able to compete night in and night out. 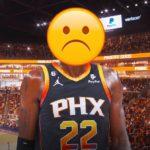 Phoenix will hope to replicate and eventually surpass the success they had in 2020-21, and with Paul leading the way, they undoubtedly have a good chance to do so. The West remains as competitive as ever, but it will be a mistake to write off a talented team like the Suns headed by a veteran on a mission to win his first ring.

"As long as I'm on the court, we have a chance to win"@Suns Point Guard @CP3 explains to @TermineRadio & @Jumpshot8 why he has so much confidence heading into the season #ValleyProud

You can hear the Suns Season Preview Show tonight at 8 PM ET/5 PM PT only on NBA Radio pic.twitter.com/uQscBM7oBm