Phoenix Suns star Devin Booker made NBA headlines on Tuesday night after he hilariously complained about the Toronto Raptors’ mascot for distracting him at the free-throw line, despite being literally the only spectator in the stands because there are no fans allowed in Ontario right now. Well, now the Indiana Pacers and their mascot followed suit on Friday and tried to throw Booker off again.

Just take a look at this. Pure comedy:

They even brought this T-Rex in prior to the game and as you can see, the Suns star wasn’t having any of it:

You’ve gotta love it. Booker was never that upset over the whole situation in Toronto but he likely got a laugh of Indiana trying to troll him here. Unfortunately, it didn’t work though as the Suns ran away with a victory, beating the Pacers 112-94. Booker absolutely erupted as well, showing out for 35 points in 35 minutes of action. He was also a sharp 7 for 8 from the charity stripe so to answer the question above from Boomer (the Pacers mascot): No, you weren’t a distraction. Book still went to work and torched his opponent.

Nevertheless, it was a hysterical moment that many people in the arena got a laugh from. Raptors fans will get a kick out of it too, there’s no doubt. It’s kind of outrageous that the Suns guard was bothered in the first place. After all, he just played in the NBA Finals.

A lot more pressure there. 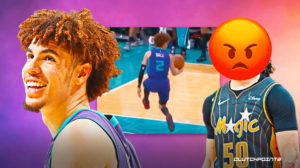