In the NFL, fortune favors the bold. Sure, teams can win games by dinking and dunking their way up and down a field in a slow matriculation that ticks time off of the clocks and slowly puts points on the board, but nothing’s more entertaining than a big 50-yard completion down the field for a touchdown, as it can change the momentum of a game and get both fans and players fired up. This was Ron Rivera and the Washington Commanders’ thought process in their Sunday afternoon showdown against the Minnesota Vikings, as, on second-and-7 with 14:10 on the clock, Taylor Heinicke launched a bomb some 50 yards through the air to connect with Curtis Samuel for an explosive, momentum-stealing catch.

What? You didn’t see the play? Well, check it out for yourself below via the NFL’s Twitter account.

What? Did you catch that at the point of attack, the triple coverage Heinicke threw into actually turned into two because Eric Kendricks, the Vikings’ star linebacker, was taken out by a back-peddling referee and opened up a hole for the Ohio State product to haul in the pass and set his team up for first-and-goal and an eventual touchdown? Goodness, that’s a lucky break.

When asked about the play at the end of the game, Heinicke gave credit where credit is due, thanking the ref for the assist, as per Nicki Jhabvala of The Washington Post. 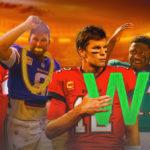 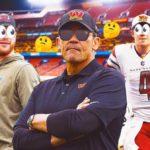 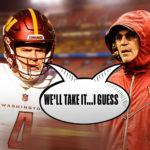 “The ref made a huge play for us,” Heinicke said.

Now if only the ref was a little more helpful for the Washington Commanders’ defense, as they surrendered three-straight scores to drop the game 20-17 to secure their fifth loss of the season. *sigh* oh well, it’s still a pretty cool story.