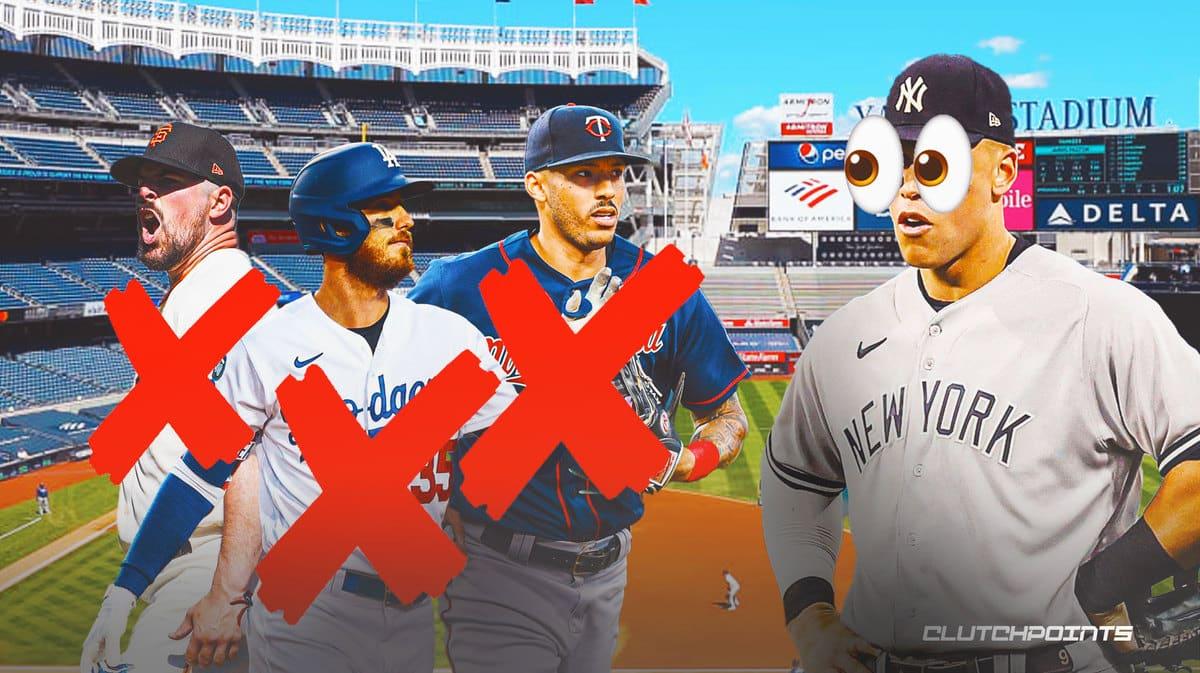 The New York Yankees are involved in pretty much every rumor the MLB hot stove is churning out right now. Despite the fact that they are doing everything they can to re-sign Aaron Judge in free agency, the Yankees are looking at every position on the free agent market right now, and once Judge ends up making his decision, New York is primed to make their moves.

It’s clear that keeping Judge is important, but even beyond him, there are holes the Yankees need to fill this offseason. Their lineup needs more consistency, and their pitching staff could use some help as well after falling apart down the stretch last season. Considering how the Yanks were swept out of the ALCS by the Houston Astros, it’s clear there is a sense of urgency surrounding the organization this offseason.

While New York is being linked to pretty much every free agent available, they obviously aren’t going to sign all of them. And even then, there are a few players the Yankees are being linked to that just aren’t worth signing. Let’s take a look at three such players and explore why that is the case.

The Yankees are obviously going to look to make some big name splashes this offseason, and it seemed like a good time for them to try to fix the left side of their infield with Isiah Kiner-Falefa and Josh Donaldson being stuck at shortstop and third base for them, respectively. Instead, general manager Brian Cashman gave both of them a vote of confidence, and it seems like they will be in the starting lineup come Opening Day in 2023.

For this reason, it makes targeting one of the top four shortstops on the market a wasteful decision. For the most part, the Yankees haven’t shown much interest in any of these guys, but if they do, it feels like Carlos Correa would be the guy not worth going after. Correa is likely going to try to get the biggest deal of the bunch despite the fact his production is pretty much in-line with what Trea Turner and Xander Bogaerts are putting up.

It would be only worthwhile for New York to target this position if Judge departs in free agency, but even then, Correa just doesn’t feel like a guy the Yankees should go after. He will cost more than the other shortstops available, and if they really want a shortstop, it would make more sense for them to go after Turner, Bogaerts, or Dansby Swanson instead.

The Los Angeles Dodgers surprisingly decided not to tender Cody Bellinger a new contract this offseason, making him a free agent. And right off the bat, the Yankees have been named a team that could have interest in Bellinger in an effort to add to an outfield that got little to no production last season aside from Judge’s exploits.

Bellinger was the NL MVP back in 2019, but he has come nowhere close to reaching those heights since then. Adding Bellinger and expecting him to immediately produce is a very risky proposition, and while Bellinger will likely get a starting job in free agency with another team, the Yankees are in no position to address an already struggling outfield with another struggling player.

We looked at why Bellinger could be the perfect fit in New York with the Yanks, but there would be a lot that needs to go right in order for Bellinger to bounce back with the Yankees. Frankly, it’s a big risk to invest in Bellinger, and given all the other drama going on with Judge right now, New York would likely be better off making a big push for Brandon Nimmo instead.

Carlos Rodon is going to get a big deal this offseason after signing a short-term deal with the San Francisco Giants last offseason and promptly having the best year of his career. The Yankees have checked in on Rodon, but there’s really no sense in them making a huge push for him this offseason.

The Yankees top two starters in Gerrit Cole and Nestor Cortes seem to be set in stone. Adding Rodon would be basically the same thing as adding a more expensive version of Cortes. Rodon has had some durability concerns throughout his career, and while he managed to prove most of those concerns wrong in 2022, handing him a long-term deal doesn’t feel like a wise move for New York.

The Yankees would be much better off trying to sign one of the top two pitchers on the market in Justin Verlander or Jacob deGrom to a shorter term deal in an effort to open their World Series window right now. If they don’t do that, they should focus on shoring up the back of their rotation and not overpaying for an ace that they don’t really need right now, which is exactly what would happen if they signed Rodon.